Australia have recovered after early losses thanks to Maxwell and Marsh.

Glenn Maxwell and Mitchell Marsh are preparing for an assault in the final of the tri-series between Australia and England at Perth. They have now put up a 100-run stand and have helped Australia recover from a spot of 60 for four. Australia were jolted early but since then they have taken control here.

Maxwell is well past his fifty and has taken control of the innings. He has played some good shots, but has also maintained a calm approach in the middle. During this innings, Maxwell has also completed 1,000 One-Day International (ODI) runs. He has to take Australia to a good score here.

Earlier, England had won the toss and chose to bowl first. One would say it is after their performance against India in the previous game on the same surface where they had bowled India out for only 200. For this game, England retained their team. Australia were strengthened by the addition of Mitchell Johnson. 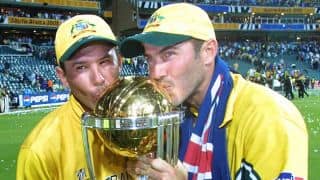