As Australia face South Africa on Day Three of first Test, centuries by Dean Elgar and JP Duminy took Proteas’ total to a good 390 for 6 at the end of the day with a lead of 388 runs at the WACA ground, Perth. South Africa pulled off a positive comeback into the game after starting off decently in the Test and currently look comfortable to win the series opener down under. Australia, on the other hand, will put in their hundred per cent in the following day to stop the run flow and restrict their opponents within an achievable target. FULL CRICKET SCORECARD: Australia vs South Africa, 1st Test at WACA, Perth

South Africa had lost 2 wickets earlier on Day Two with 104 runs on the board. Having lost the two top-order batsmen early, the onus was upon Duminy and Elgar to bring in stability to the South Africa innings. The Perth wicket did not produce much of movement on Day Three and the two batsmen went on to pile runs, playing with much composure. The players built up the first big partnership of the innings. The partnership added more than hundred runs before lunch on the day. After lunch, the duo came in to score their individual centuries. Duminy got to his fifth Test century while his last century in the format came in 2014. Dean Elgar also went on to score his fifth Test ton. The partnership added 250 runs before Duminy got dismissed for 141 just before tea. While the batsman had played similar deliveries with ease in the morning, he was outwitted by extra bounce as wicketkeeper Peter Nevill made no mistake to take a simple catch as Duminy edged the Peter-Siddle-delivery to him. Full Cricket Updates, Australia vs South Africa, 1st Test, Day 3 at Perth

Elgar stayed at the crease as skipper Faf du Plessis joined him in the middle. However, the partnership did not last for long as Elgar soon departed for 127. South Africa lost a few quick wickets from here on. Temba Bavuma departed for 8 runs while du Plessis followed him scoring 32. As South Africa ended Day Three, Quinton de Kock and Vernon Philander are unbeaten. De Kock was dropped once during the innings, which can be the turning point of the match, given the potential and the form the batsman has. With 4 wickets still in hand and de Kock batting, South Africa can expect a good lead of about 450 from here on.

Though the initial phase of the day was barely productive for the hosts’ bowlers, they got some success later towards the day as they scalped 4 wickets. Peter Siddle and Josh Hazlewood remained the highest wicket-takers of the innings with a couple of wickets each. Mitchell Starc tasted some late success with a solitary wicket, Mitchell Marsh also contributed with a wicket.

Earlier, on Day Two, South Africa had made a brilliant comeback with the ball. Dale Steyn picked up the first wicket of the match, breaking the partnership between David Warner and Shaun Marsh. Steyn, after sending Warner back for 97, felt a niggle in his shoulder and was promptly taken out of the field. Medical reports suggested a fracture in his shoulder which has ruled him out of the series and will not be a good news for the side. However, his teammates continued from where he had left and ended the Aussie innings soon. Australia put up 244 runs on the board and could accumulate a lead by 2 runs only. Philander was the leading wicket-taker with his 4 wickets while Keshav Maharaj did a brilliant job bagging 3 wickets on his debut.

South Africa had won the toss in the match and elected to bat first. Their first innings ended with a par score of 242 on Day One. The top-order collapsed early but the middle-order took up the responsibility and scored the bulk of the team’s total. De Kock emerged as the highest run-getter of the innings with 84 runs while Temba Bavuma also added 51 crucial runs. 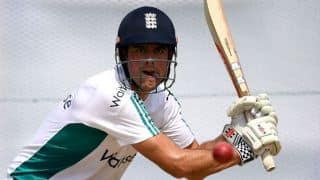 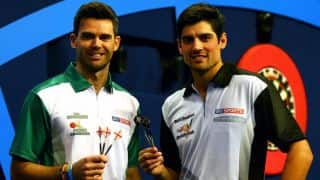