Batsmen Dean Elgar and JP Duminy batted brilliantly to take the team to 295 for 3, with a lead of 293 runs, at tea on Day Three.

Visitors South Africa lose set batsman JP Duminy as they go for tea on Day Three of the first Test against Australia. Playing at WACA stadium, Perth, the visitors have made a brilliant comeback into the match after a par first innings total. On Day One, South Africa were bowled out for 242, while they bundled the opponents for 244, handing just a 2-run lead. In reply to that, batsmen Dean Elgar and JP Duminy batted brilliantly to take the team to 295 for 3, with a lead of 293 runs, at tea on Day Three. LIVE CRICKET SCORECARD: Australia vs South Africa, 1st Test at WACA, Perth

On Day Three, South Africa resumed batting with 104 runs on the board with the loss of 2 wickets. Elgar and Duminy both were at the crease and understood their responsibilities well, batting with patience. The duo gradually built the first big partnership of the innings for the visitors. Earlier, the team had lost the wickets of opener Stephen Cook and No. 3 Hashim Amla. Elgar got to his 50 off 130 deliveries while Duminy brought up his 50 off 90 deliveries. At lunch, the partnership looked strong, having added more than 100 runs and batting comfortably. South Africa had a lead of 181 runs at lunch.

Coming back from lunch, Elgar and Duminy took the partnership forward. Duminy got to his fifth Test century while his last came in 2014. The player looked confident playing his strokes. Elgar got to his fifth Test century as well soon after Duminy. Though the batsman looked nervous approaching the milestone, he played a very crucial knock, playing the perfect partner to Duminy and helped his team get to a comfortable position. LIVE Cricket Updates, Australia vs South Africa, 1st Test, Day 3 at Perth

Just before going for tea, South Africa lost the wicket of Duminy. It was a successful change in bowling by Steven Smith who handed the ball to Peter Siddle. Siddle got Duminy for extra bounce as the batsman tried to drive the ball but edged it to wicketkeeper Peter Nevill, ending his innings for 141 runs. Skipper Faf du Plessis joined Elgar, who was batting at 112, at the crease.

Earlier on Day Two, Australia were bowled out for 244 and managed to take a lead of just two runs. They were 150 for no loss at one stage, with David Warner and Shaun Marsh going strong. But Warner s wicket triggered a collapse and Australia were bowled out for just 244, going past South Africa s first innings total of 242. Vernon Philander was the pick of the bowlers with four wickets. Debutant Keshav Maharaj chipped in with three wickets as well. But South Africa suffered a big blow after Dale Steyn walked off the field on Day Two, holding his shoulder. It was later confirmed that he had a stress fracture and could be put of action for as many as six months. South Africa effectively have just three bowlers in this match, in Steyn s absence. 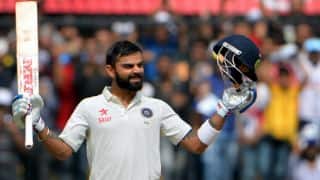