Australian wicketkeeper Matthew Wade has been roped into the side as Peter Nevill has been dropped.

Australia made some shocking changes for the third and the final Test against South Africa at Adelaide after suffering two defeats on a trot in the first two games. They have had a terrible time in this format and has made as many as six changes for the final game, which is also a day-night encounter. Australian wicketkeeper Matthew Wade has been roped into the side as Peter Nevill has been dropped. The interesting thing to watch out in Wade will be the fact that how much has he worked on his wicketkeeping skill. It will also be a tough challenge for his vision as he suffers from colour-blindness. But Wade has played with the pink cherry at Sheffield Shield level and is certain that he won’t have any difficulty in picking it up. FULL CRICKET SCORECARD: Australia vs South Africa, 3rd Test match at Adelaide Oval, Adelaide

Wade was quoted in a report from smh.com.au saying, “It can’t be an issue. I’ve got to work it out. You’ve just got to get used to it. I think it’s trying to get it out of your mind. I can see the colour of the ball, I pick it up. It’s just at times it takes a little bit longer to work out the depth of where it’s coming. I’ve got more used to it I suppose. The more you play, you get more used to it.” Also the fact that the ball manufacturing company Kookaburra has also changed the colour of the seam from green to black. “The ball is getting better year in, year out. It’ll be interesting to see what it does,” Wade added.

The third Test commences on November 25th, and Australia will be eyeing to sign it off on a high as South Africa have a 2-0 lead in the three-match series. 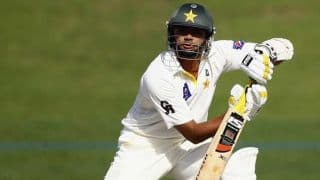