Usman Khawaja and Steven Smith weathered away the likes of Kagiso Rabada and Kyle Abbott to help manage Australia reduce South Africa's lead to just 120-runs on Day 3 of the 2nd Test at Hobart.

South Africa, after controlling most part of Day 3, were seen to be the more disappointed of the party, as the final session of play saw Australia showing resistance. The second Test between Australia and South Africa at the Bellerive Oval in Hobart was an enthralling sight for cricket lovers, as an even contest between the bat and ball was being witnessed. Usman Khawaja, who was having a poor series so far finally mustered himself to a well deserved half-century, which was much needed for a morale booster of a below-confident side. Khawaja along with Smith ensured, that Australia go into stumps on Day Three with just 2-wickets down. Just few over before the scheduled close of play batsmen took light and early stumps were declared with Australia on a score 121 for 2, trailing South Africa by 120 runs. Khawaja remained not-out on 56* while skipper Smith unbeaten on 18*. FULL CRICKET SCORECARD: Australia vs South Africa, 2nd Test at Hobart

Khawaja brought up his fifth half-century in 91-balls, that included seven boundaries past the fence. This is also the first Australian half-centurion of the match. Skipper Smith who missed out on a half-century in the first innings weathered out any thunderbolts Kagiso Radaba and Kyle Abbott were dishing out. Smith used the depth and reach of the crease really well to counter the seam conditions.

The pair added just 42 runs playing 13 overs, which to their credit was one of most fiercest spell of bowling under gloomy conditions. Smith and Khawaja survived almost 8 overs of exceptional seam bowling by Rabada and Abbott before chancing their bat against the spin of Keshav Maharaj, who was an welcome change for them.

Abbott continued to make his outing count as he was drafted in the side for the injured Dale Steyn. Abbott was too good for Khawaja to even have him nick the ball. Abbott even caused trouble for skipper Steven Smih whose shuffling on the crease made him an easy case for leg-before if the ball ever wrapped his pads.

Abbott would have been laughing over how he got the wicket of Warner. Trying to keep the ball down, Warner managed to ricochet the ball off his thigh guard, which lobbed on to his elbow and found his stumps to fall on. Warner played a much more determined and gritty innings than anything in the series so far, finally went for 45 missing his half-century by 5 runs. Rain has played a frustrating part so far in this session with as many as two intervals being taken post-tea.

Warner and Khawaja after the wicket of Joe Burns has weathered the South African storm much to the delight of their team. Warner in particular has looked in command against Philander and Rabada, with both of them getting the better of the batsmen quite a few times; only to miss out on getting the edges. Warner looked to play with a straight bat to anything that was not in the hitting zone. Khawala on the other hand, looked a bit shaky against Philander and Radada getting the away from him. Khawaja battled it hard and could very well be his decisive innings, thus far.

Day Three started with South Africa in a commanding position with a lead of 86 runs over the host s. Overnight batsmen from Day One, as Temba Bavuma and Quinton de Kock made merry against an unchallenging bowling attack. de Kock after a slow start to his day, went on a rampage en-route his second Test ton. Bavuma, continued to be the calming effect in the 144-run stand, as de Kock went all guns blazing against Australian bowling. de Kock fell 104 runs to Hazlewood.

Post this, there was no stopping Hazlewood, who kept on picking wickets after wickets to grab a 6-for. Hazlewood s scalps included that of Kyle Abbott and Philander, to add to the tally of de Kock, Hashim Amla and Faf du Plessis. Hazlewood s figures read 6 for 89, while Mitchell Starc ended with just 3-wickets in his 24 overs. The other wicket to fall was taken by Joe Mennie, his debut wicket, which was of Bavuma for 74. 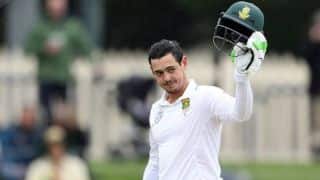