Australia were bundled out for just 161 runs in yet another batting collapse as Kyle Abbott recorded an impressive 6 for 77 to hand South Africa a win by an innings and 80-runs to also clinch the 3-match series 2-0.

Australia would have hoped for a better start to Day Four considering how they have fared in the second Test thus far against South Africa. With as many as 8 wickets in their kitty and the likes of Steven Smith and Usman Khawaja still out in the middle, their were chances that Australia might stretch the game into Day Five. Rain or no rain, Kyle Abbott and Kagiso Rabada were in no mood to play on until Day Five. The Bellerive Oval in Hobart were to witness an outstanding victory by South Africa, which could not be stopped with one whole day being washed-away. Facing a deficit of 121-run on Day Four, Australia were bundled out for just 161 runs in yet another batting collapse. Abbott recorded his third 5- wicket haul in Tests to hand South Africa a win by an innings and 80-runs; they also clinch the 3-match series 2-0. With this South Africa also win their third straight series against Australia in Australia. FULL CRICKET SCORECARD: Australia vs South Africa, 2nd Test at Hobart

Fittingly Abbott snatched up the final wicket of the match in the form of Nathan Lyon. Lyon tyring to go over the top, ended up spooning a simple catch to Vernon Philander standing at mid-on. With this Abbott also picked his second 6-wicket haul in Tests. Abbott’s match figures read an outstanding 9 for 118, best bowling figures for any bowler at the Bellerive Oval. Rabada was the tormentor for Australia this morning picking up 4 wickets for just 32 runs.

Abbott fifth wicket came in the form of Mitchell Starc, who gave a simple regulation catch to de Kock for a 13-ball duck. Rabada in particular continued his show from the second innings of the Perth Test where he ripped apart the Australian line-up. Abbott iniciated the downfall in the second innings, but it was Rabada who tore in to the Australian lower middle order as all of his wickets came in one session of play unlike Abbott.

Rabada continued his charge picking up his second of the over in Joe Mennie. Mennie got out to a low-full toss unlike his other teammates who were out bounced. Rabada kept the ball full coming just slightly into the batsman, to which Mennie played the wrong line.

Nevill who struggled to keep pace with some tight bowling from Rabada and co. finally went for a 16-ball 6. Nevill fell to Rabada just after the drinks break, which is a normalcy around cricket. Rabada got the ball to extract extra purchase of the pitch off a well-directed body bouncer to which Nevill had no choice but to fend his bat at it. The ball only managed to catch the glove and lob it to fourth slip.

Smith continued to look solid as his teammates fell one-after-the other, who took took 29-balls to get his first run this morning. Soon Peter Nevill had joined his captain in the middle.

Ferguson was not having a dream debut of sort getting out for just 1 run to his name. This time Kagiso Rabada struck, as got the ball to come back into the batsman from an off-stump line to catch Ferguson in two-minds. Ferguson trying to leave the ball was undone by the lack of bounce with the ball catching hold of his glove and lobbing right into the hands of slip fielder. Debutant Callum Ferguson came out at No.5 to support his skipper Smith, who again was battling it out for his team.

Adam Voges, who had been going through a poor patch with the bat, joined Smith in the middle. Voges did nothing monumental, as he got out for just 2-runs. Abbott was at it again prompting Voges to play a false shot with his extra bounce. Voges was half-minded between playing the hook or the pull shot, ended up giving a simple forward catch to JP Duminy at gully region.

Abbott and Vernon Philander had a terrific opening burst, which proved to be lethal for Australians. After four overs of excellent display of seam bowling Abbott struck early getting Usman Khawaja for 64 runs. Khawaja fell victim to his own strength, trying to slash the ball hard, ends up giving Quinton de Kock a simple catch chest height. The pair brought-up their 50-run stand in 105 balls, earlier in the session.

Earlier on Day One, South Africa skipper Faf du Plessis won the toss put Australia into bat, under bowling friendly conditions on offer.Australia tried out a handful of changes in their playing XI, calling in two debutants in Joe Mennie and Callum Ferguson, along with Joe Burns, to revive their sinking ship. Winning the toss, Faf du Plessis asked the hosts to bat firstSouth Africa powered by Philander and Abbott dashed hopes of the hosts of a memorable comeback notching up 8-wickets between them to bundle the home side for 85 runs.

South Africa thanks to Dean Elgar and Stephen Cook went past Australia’s score of 85, to gain a lead of 89-runs on opening day already, only good sign was that Mithcell Starc picked 3-wickets to down the damage. Day Two was a complete wash-out with rain playing spoilsport. Day Three, saw Quinton de Kock rise to the occasion and cashed in on Australia s lazy and ineffective bowling to help their team to a mammoth 241-run lead, in process getting his second Test ton. Josh Hazlewood provided some much needed happiness in the home teams camp picking up his foruth five-wicket haul.

Man of the match: Kyle Abbott

This is also South Africa’s third successive Test win against Australia in Australia. They won at Perth in Dec 2012, then again last week at Perth and now in Hobart. The third and final Test of the series will be played from November 28 at Adelaide Oval in Adelaide. This match will be a day-night affair; second pink-ball game for the Adelaide in as many years. 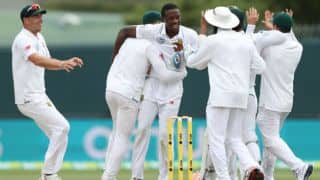