When Australia lock horns against South Africa in the second Test starting on Saturday at Hobart, all eyes would be on the South African opener Stephen Cook who has been dismal in his form since the inception of this tour. The tourists did win the first Test by 177 runs thanks to an impressive bowling spell from Kagiso Rabada in the second innings, but rather than that, Cook along with Hashim Amla could not score many runs. Cook was dismissed for a duck in the first innings while in the second one he scored just 12 runs and on the other hand Amla scored a duck and just a single in the first and second innings. Full Cricket Scorecard: Australia vs South Africa 2nd Test at Hobart

Talking about the same, Cook’s fellow opener Dean Elgar who scored a century in the second innings was quoted talking to espncricinfo.com as, I’m sure if I was in that position I’d be a bit frustrated because as a player in this environment you want to make a contribution. And I know a guy who’s just started his international career wants to make a big play for South Africa,” Elgar said. “Everybody shares his frustrations. As his opening partner, I share his frustrations with him. I am frustrated on his behalf. Hopefully, he can feed off the good form of us winning the first Test and make a big play for us in the second Test.”

Cook has had a lot of criticism coming from him due to the method that he is currently implying in his batting and also the way he has been dismissed. Off lately, he has been dismissed mostly behind the wickets which have increased speculations about him not being able to shuffle in the crease while playing against seamers.

Rilee Rossouw on the hand has been selected in the squad after his impressive runs in the One-Day International (ODI) series against Australia where he was also adjudged as Man of the Series for scoring the maximum runs. So in all probability, it can be expected that Rossouw is called up in the squad for his maiden Test in the Australian tour if Cook continues with his boring form. 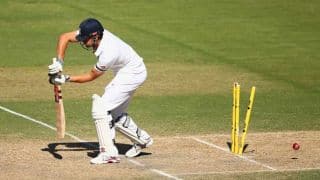