Extensive covers protected the Bellerive pitch and surrounds amid continual rain with a few hardy souls watching on from the stands during Day Two of the Australia vs South Africa Test at Hobart.

Hobart: Rain prevented a start to the second day of the second Test Sunday with South Africa holding an 86-run lead after a scattergun opening day’s play in Hobart. Extensive covers protected the Bellerive pitch and surrounds amid continual rain with a few hardy souls watching on from the stands. The Proteas are in the box seat to claim victory and clinch their third consecutive series in Australia after rolling the home team for just 85 off 32.5 overs. Vernon Philander powered the Proteas with five for 21 and was supported by recalled paceman Kyle Abbott with three for 41. LIVE CRICKET SCORECARD: Australia vs South Africa, 2nd Test at Hobart

It was Australia’s lowest total at home against South Africa to revive memories of recent catastrophic batting collapses. The capitulation revisited the nightmares of their miserable 47 in Cape Town in 2011 and England’s demolition of them for 60 at Trent Bridge last year. The Proteas reached stumps at 171 for five, representing an overall lead of 86 runs. Temba Bavuma was unbeaten on 38 with Quinton de Kock on 28.

If the tourists are able to add another 150 odd runs to their total on Day Two, they might find themselves in a position to have out-batted Australia from the contest. Clearly, after a string of batting collapses in the three-Test series in Sri Lanka and even in the opening Test of this series at Perth wherein Australia lost by 177 runs Australians are low on confidence as far as batting is concerned and this will continue to haunt them in the games to come. However, it is rapidly turning out to be a do-or-die situation for many in this Australian side, and they will have to arrest the damage that has been caused.

The forecast was for further rain throughout Sunday, becoming less likely in the evening. Monday’s outlook was for a few showers. 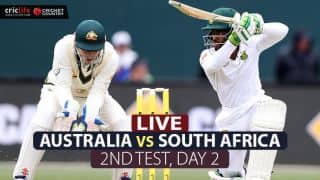