Australia captain Steven Smith said the players drafted in for the third-test victory over South Africa had contributed to a "good start" to the new era of Test cricket.

Australia captain Steven Smith said the players drafted in for the third-test victory over South Africa had energised the team and contributed to a “good start” to the new era of test cricket in the country. Smith went public with his feelings of humiliation at the innings and 80-run defeat in the second test in Hobart, which gave South Africa an unassailable 2-0 lead in the series and triggered an overhaul of the side. New caps Matt Renshaw, Peter Handscomb and Nic Maddinson came into the batting order and Matt Wade was recalled at wicketkeeper in place of Peter Nevill. FULL CRICKET SCORECARD: Australia vs South Africa, 3rd Test at Adelaide

Although none had outstanding matches in the seven-wicket victory in Adelaide, which Australia wrapped up with a day to spare on Sunday, Smith said they had made a difference. “I felt a bit of a switch straight away, in energy and presence around the group,” he told reporters. “In our first training session at Adelaide Oval, everything felt like it was running smoothly. When we got our chance to get out on the field, I felt we had good energy and presence. “We were able to take some good catches in this test match, probably part of our game that has been a bit disappointing. It’s been great to have these guys come in and bring that energy.” FULL Cricket Updates, AUS vs SA, 3rd Test, Day 4 at Adelaide

The victory ended a run of five defeats for Australia, who next face Pakistan in another three-test series in the traditional fixtures around Christmas and the New Year. “You don’t grow overnight, I think it’s a good opportunity for this side to play together, I guess improve and know each other’s games and get better as a team,” Smith added. Faf du Plessis positive of pink-ball Test cricket future

“It was a good start but still plenty of work to do.” Smith hailed Man of the Match Usman Khawaja as “magnificent” for his innings of 145, Australia’s only century of the series, particularly as he was forced to step in as an opener for David Warner after South Africa’s sudden first-day declaration. “It shows a lot about his character and what he wants to do and I guess that’s kind of a template for what we’re looking for,” Smith added.

Smith will next lead the test side out against Pakistan in another day-night match at the Gabba on Dec. 15 and admitted he would retain some unhappy memories of the South Africa series. “[It’s] a little bit bittersweet, we were outplayed in the first two tests by South Africa but I’m really proud of the way the team came back in this game,” he said. “New players came in and we showed some fight and some character and that’s what I want us to do.” 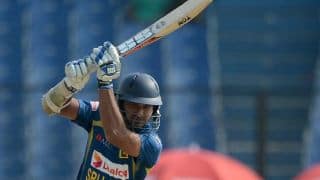