South Africa reached 100 for 2 trailing by 24 runs at Dinner on Day Three of final Test at Adelaide Oval against Australia. The hosts remained in command of the second session, having taken a strong lead in the first innings and then getting rid of two heavy run-makers. Mitchell Starc drew first blood and nabbed Dean Elgar whereas Josh Hazlewood followed the suit and once again dismissed his competitor Hashim Amla for 45, leaving South Africa under pressure. However, JP Duminy and Stephen Cook headed for dinner break at 43 and 5 not out respectively. They added 18 runs for fourth wicket after Amla and Cook put South Africa in secured position. LIVE CRICKET SCORECARD: Australia vs South Africa, 3rd Test at Adelaide

South Africa began their final innings of the series with Cook and Elgar. South Africa s opening batsman Elgar was troubled by Australian bowlers instantly. Starc s knack of striking early continued as he provided a crucial breakthrough dismissing the left-handed Elgar for a duck, with Steven Smith comfortably grabbing the opportunity at the second slip. Starc had dismissed Elgar in similar passion in the first innings, but the bowler had overstepped and Elgar was safe after referral.

Smith introduced spin into attack post the 14th over. Australia kept South Africa under check as Cook and new batsman Amla added just 27 runs by the 15th over.

Starc began the second half of the session after drinks. Amla was given a life with debutant Matt Renshaw dropping him for 13 at the first slip. It was in the similar fashion in which Amla was dismissed in the first innings by Renshaw. Boosted by the drop catch, Amla added insult to injury, attacked Starc with back-to-back boundaries. With that Amla and Cook sailed through for their 50-run stand for third wicket. Both Amla and Cook were standing at a score of 26 not out each by 20th over. Amla reached 41 by the 23rd over, while Cook complimented Amla at 27. ALSO READ: Australia vs South Africa, day-night Test, Day 3, Tea Report: Hosts extend lead to 124

Amla smacked Starc for a boundary again and reached 45, inching closer to his 32nd fifty. However, Hazlewood was called into attack once again and this time the competition with Amla intensified, with the right-arm bowler dismissing the batting great for the fifth time. Hazlewood s delivery flicked the back pad and easily caught by Matthew Wade behind. That ended the growing partnership of 81 runs between Amla and Cook. Amla s struggle continued in this series despite smashing 6 fours and a six. Duminy was off the mark right away with his first boundary towards extra-cover region leaving David Warner s athletic skills in vain. 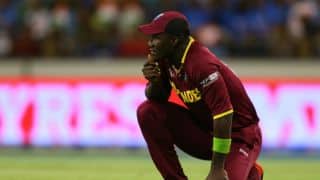 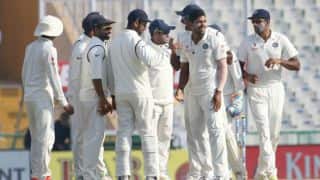