AB de Villiers was ruled out of the entire tour after he underwent elbow surgery in August.

Johannesburg: Faf du Plessis, who is leading South Africa for the three-Test series against Australia, does not expect AB de Villiers to be fit in time for the day-night Test in Adelaide starting from November 24. The regular Proteas skipper was ruled out of the entire tour after he underwent elbow surgery, but later on insisted that he wanted to defy the physios and return in time for the last Test in series down under. The Test series begins on November 3 in Perth and the stand-in skipper feels that waiting on De Villiers is just wishful thinking on everyone’s part. Upon his arrival in Adelaide, Du Plessis—when asked if De Villiers would make it in time—replied, I don’t think so. He’s just had an operation. We’re not expecting it. FULL CRICKET SCORECARD: Australia vs South Africa, 1st Test at W.A.C.A Ground in Perth

“If it happens, great. If it doesn’t, we’ve got some guys who are capable of putting in good performances, Sport24 quoted him as saying. The 32-year-old further said De Villiers is a very competitive guy and he wants to put himself out there against the best in the world. So I’m assuming he’ll be in South Africa trying to get ready. But after a big operation like that and from the doctors’ reports that I’ve read it doesn’t seem likely that he will be fit, he said.

The first Test starts at the WACA in Perth from November 3, the second Test would be played at the Bellerive Oval, Hobart from November 12 and the third and the last Test at the Adelaide Oval from November 24. India vs England: James Anderson ruled out of 1st Test due to shoulder injury 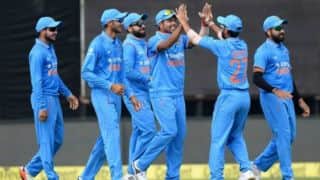