After losing the first Test by 177 runs, Australia will look to level the series in the second Test at Hobart.

Johannesburg: Former South African skipper Graeme Smith, who believes there are some serious problems with the Australian cricket at the moment, has said there is a lack of confidence or self-belief in that set-up. Australia, who came from an awful Test tour to Sri Lanka where they lost the three-match series 0-3, didn’t capitalise on the advantage they gained on the first day of the Perth Test against Proteas and eventually went on to lose the game by a huge margin of 177 runs. Smith, who led South Africa to two hard-fought Test series wins in Australia, believes there are multiple issues with the Australian cricket. “There is obviously a lack of confidence that has developed, maybe through these losses, and the way they collapsed and fell away in that Perth Test. To me, it showed that maybe, there is a lack of confidence or self-belief in that set-up at the moment. It does show me that there is something that’s not right there,” Smith was quoted as saying by Sport24. FULL CRICKET SCORECARD: Australia vs South Africa, 1st Test at Perth

The 35-year-old, who retired from all formats of the game in 2014, believes that the Australia’s decision to take a young bowling attack to South Africa for the five-match ODI series, which they lost 0-5, was a mistake. “I was quite surprised at some of the selections that came to South Africa in the one-day series, and that hurt them badly. They lost 5-0,” he said. “For me, [the Australian team] was obviously built on the skill factor, but it was always built on a hardness, a really strong respect and culture for that Australian environment. I wonder whether it’s this whole rotation policy, whether some of that has been lost: that culture, that respect within the environment has been lost with so many different players coming through the system,” he added. READ: Joe Mennie to make his Test debut against South Africa at Hobart

The former left-handed opening batsman said he felt for the Australian skipper Steven Smith, who has been plunged into the deep end. “I can resonate with being in that position as a new captain. You have a lot to figure out, and I think you only have to pick up a book or a newspaper to realise there was quite a polarised, abrasive culture within the Australian set-up before he took over,” he said. READ: Peter Siddle ruled out of 2nd Test

“There will be natural debate on who is the right person to lead – should it be the old style, brash David Warner approach, or Steve Smith. He has to overcome a fair few things, but, hopefully, he’ll be able to do that really quickly,” he added. It would be tough task for the Steven Smith-led side to stage a comeback in the three-match Test series when it faces South Africa in the second game in Hobart starting from November 12. 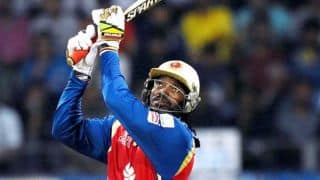 The day a cigarette stopped cricket