Mitchell Starc was very much going to be part of the recently concluded South Africa ODI series, however, an injury kept him away from the entire tour after a fielding mishap six weeks ago.

Australia s bowling spearhead Josh Hazlewood and Mitchell Starc have been out of action since the Sri Lanka tour. Starc was very much going to be part of the South Africa One-Day International (ODI) series, however, an injury kept him away from the entire tour after a fielding mishap six weeks ago. Now that Starc is recovering from his injury, he is very much expected to be part of the South Africa Test series. Australia have a long season coming up and their former bowler Craig McDermott declared that the national side might struggle if Hazlewood and Starc are hit by injury at this peak time. But Australia do have back-up plan with the return of their pacer Patrick Cummins. FULL CRICKET SCORECARD: Australia vs South Africa, 1st Test at Perth

However, McDermott feels Australia will be in further trouble if the pace-duo remain out of action. Speaking to cricket.com.au, McDermott said, As long as we don t lose Hazlewood and Starc, if we lose both of those in the first couple of Test matches we re in for a long hot summer. They re our two best bowlers. I certainly wouldn t want to be going into too many Tests without Hazlewood and Starc in a Test series. Hazlewood and Starc will play in NSW s opening round of Sheffield Shield, which is to be played at Brisbane on Wednesday.

Despite his troubled preparation, Starc is expected to be named in Australia s Test squad for the first Test against South Africa at the WACA Ground starting November 3. The pitches in Australia is a key factor in the velocity philosophy embraced by McDermott and head coach Darren Lehmann. Lehmann feels the Perth wicket favours pace and bounce, so McDermott backed the importance of quick bowlers in Australia. McDermott added, I think it (velocity) is very relevant. Particularly in Test cricket, we need velocity for reverse (swing) bowling in Test matches. And just to create that aura around our bowling attack we ve had for a long time with Jonho (Mitchell Johnson), Sidds (Peter Siddle) back when he was bowling in the 140kph s, Ryan Harris who s just retired was (regularly) early 140kph s. ALSO READ: Peter Siddle set for comeback, says Matthew Wade

He further added, James Pattinson, Nathan Coulter-Nile can bowl that pace. I think it s really important for our bowling attack particularly for Test cricket and probably one-day cricket as well. McDermott felt Cummins has the capability to pick quick wickets on this pitch as he grabbed 15 wickets in six matches during the Matador Cup and ended up being the joint highest wicket-taker alongside teammate Doug Bollinger and South Australia s Cameron Velente.

So the 23-year-old expected to feature in this Test series and is also expecting to make his way in ODI format. McDermott backed Cummins and said, He (Cummins) may play one-day cricket for Australia later in the year. Watching him here at Drummoyne the other day (against Queensland when he claimed 4-26), he s certainly back. As far as pace goes he s getting through the crease nicely, all his lines look really, really tight and hard. That s a great sign for us.” 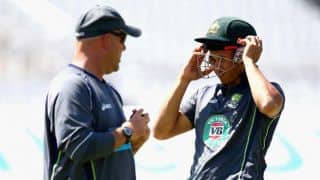