Australia are all set to take on South Africa and continue their domination just they way they did on the Day One of the first Test at WACA, Perth. After bowling out South Africa for mere 242, Australia are at 105 for no loss with David Warner and Shaun Marsh providing a rollicking start. Warner has been the attacking anchor in this partnership with 73 runs off just 62 which are laced with 13 cracking boundaries and one huge sixer. Catch the live telecast of the match over Star Sports HD 2 and Star Sports 2, while the live streaming of the match will be available on starsports.com. Australia and South Africa have already indulged in war of words ahead of the first Test. FULL CRICKET SCORECARD: Australia vs South Africa, 1st Test at WACA, Perth

Much has been anticipated from this match on Day Two as the hosts have displayed a domination which was not at all seen in any of their previous Test matches in the recent times. They have taken full advantage of playing in their home conditions and are looking all poised to make sure that they utilise the home conditions to its fullest. Micthell Starc’s return will be a good and vital point for them as he was out to a training injury. But with the way the left arm pacer has bowled in the first innings is definitely a good sign for the hosts. Moreover, they would also be happy with the way Shaun Marsh has played the role of second fiddle to Warner. Marsh has scored unbeaten 29 runs off 67 balls consisting of three boundaries.

As Australia are trailing just by 137 runs, it won’t take much time before they surpass this deficit and take a dominating lead over the clueless looking visitors and get to a commendable position on Day Two. 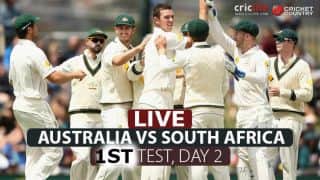 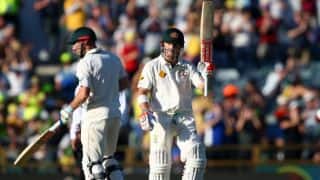