Cricket Tasmania chairman said the thing that distresses him most is the talking down of the West Indies.

Australia won by an innings and 212 runs
Man of the Match: Adam Voges
Series: Australia won the 3-match series 2-0

Tony Harrison, Cricket Tasmania chairman has come down strongly on all those who are vouching for shifting of the venue of first Test from Hobart to Canberra in the upcoming Australia vs West Indies 2015-16 series. Harrison, who is also Cricket Australia director, opined that bureaucrats of Canberra, New South Wales (NSW) are greedy for money and are putting the benefit of the game at stake for their own selfish ends. Some officials and ministers of NSW had voiced their opinion that Hobart Test should be shifted to a venue in NSW as crowd turnout is poor in Hobart. It is after three years that Bellerive Oval at Hobart, Tasmania will be hosting a Test. Australia vs West Indies 2015-16: Tasmania Premier rejects idea to shift venue of 1st Test

In a conversation with ABC, Harrison said, “I have read comments like ‘we deserve the Test, Hobart doesn’t’ kind of thing, I don’t think that’s helpful. We are going through a process in Australian cricket at the moment called One Team, which is the states and Cricket Australia all acting as one, and what has disturbed me most out of Canberra is that it is hardly ‘one team’ behaviour. We [CA] spent a lot of money and effort getting this One Team thing going, and here instantly we have an issue … I think that is disappointing.”

“There are certainly people in Cricket Australia management who don’t necessarily look at it from a cricket perspective; they look at it from the dollars and cents perspective. But that’s why we have a board of directors. The workers of Tasmania are competing with the fat cat bureaucrats in Canberra who have the highest disposable income in Australia.”

“The thing that has distressed me most is the talking down of the West Indies, which sends a very poor message to the Tasmanian public. I’ve been very disappointed by the comments of former cricketers who have made a lot of money out of cricket.” 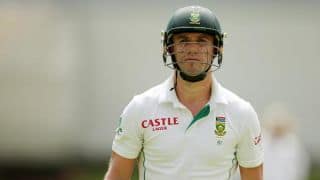