The pair will be part of the Australia A squad that will be in the UK from June 20 to July 2.

Josh Hazlewood and Kane Richardson have been put on standby by Australia‘s selectors for the 2019 ICC Cricket World Cup, having today been omitted from the defending champion’s squad of 15.

Both fast bowlers failed to make the cut for the World Cup, but national selection panel chairman Trevor Hohns said that Hazlewood and Richardson will be on call should one of Mitchell Starc, Nathan Coulter-Nile, Pat Cummins, Jhye Richardson or Jason Behrendorff be injured before or during the tournament in England.

The pair will be part of the Australia A squad that will be in the UK from June 20 to July 2.

“Josh was certainly an interesting one for us of course his complete lack of match play over a period of time now obviously weighed against him he’s yet to prove he’s fully fit,” Hohns said in Brisbane. “Whilst we thoroughly expect he will be in due course the fact that he’d played probably only three one-day games for us over the last 12 months also weighed against him.

“However in saying that, he still remains an option for us for the World Cup if a replacement were to be required for one of our other fast bowlers. He along with of course Kane Richardson are the standby fast bowlers and we’d have to make a choice at that stage if somebody was required.”

Hazlewood recently recovered from a back injury that kept him out of action since January and had admitted to being nervous about Australia s selection for the World Cup.

Richardson was sent home from India in March after he suffered a side strain, and replaced by Andrew Tye.

“I think he’s tracking really well for the Australia A series the build-up to that starts a bit later,” he told reporters in Melbourne. “So that will give him a bit more time to start getting his body up, particularly for the Ashes. He was well and truly in contention for this squad, no doubt, but it just comes down to he hasn t bowled a huge amount, or at all.

Australia open their World Cup campaign on June 1 against Afghanistan. 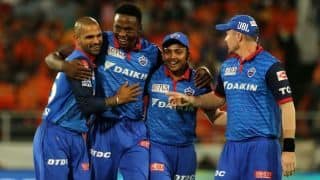