Australian umpire John Ward has been declared stable after being hit on the head.

Dindigul: Australian umpire John Ward, who was officiating on the opening day of the Ranji Trophy match between Punjab and Tamil Nadu, has been declared stable after being hit on the head. Ward was immediately rushed to a nearby medical centre before transferring to a hospital after enduring a blow to the head from a powerful shot by Punjab’s Sran in Dindigul on Tuesday. “He wasn’t unconscious. After he got hit he fell to the ground, but he stood up and walked up to the ambulance by himself,” Dindigul District Cricket Association secretary N Venkataraman was quoted as saying by ESPNcricinfo. UPDATES: Tamil Nadu vs Punjab, Ranji Trophy 2015-16, Group B match, Day 2 at Dindigul

“He is completely normal. He has a tiny bulge behind the right ear which was identified in the scan. The medical observation, as per BCCI norms, has to be done in a big hospital, so we have shifted him to Apollo Hospitals in Madurai. There also we took scans. He is completely alright. Normally, in the event of a head injury, a patient is advised to be under observation for a day or two. He has been advised rest for a minimum of one day,” he added. The 53-year-old umpire was working in India as part of an umpiring exchange programme between Board of Control for Cricket in India and Cricket Australia. Australian umpire hit on head during Ranji Trophy 2015-16 tie between Tamil Nadu and Punjab at Dindigul

According to police, the umpire fainted had was rushed to a hospital at Palani where his condition is stated to be serious. The batsman was facing Chandrasekhar when he drove the ball which hit Ward, who was functioning as the main umpire. Visitors Punjab took firm control of their Group B Ranji Trophy cricket match after bowling out Tamil Nadu for a meagre 68 and then extending their first-inning lead to 174 runs, as a staggering 21 wickets fell by the wayside on Tuesday, reported PTI on Tuesday. 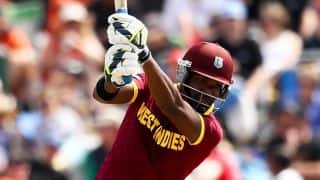 Australia vs New Zealand, Trans-Tasman Trophy 2015: Why the Kiwis did not win