Day one of Australia‘s four-day intra-squad cricket match in Southampton – viewed by Test skipper Tim Paine and coach Justin Langer as pivotal to selection for the Ashes opener on August 1 – witnessed 17 wickets tumble for just 201 runs.

On an Ageas Bowl pitch offering considerable assistance to pace bowlers on both sides, Pat Cummins and Jackson Bird took three wickets each and Michael Neser 4/18 while Marnus Labuschagne top-scored with 41.

The result of this was that the Brad Haddin XII was bowled out for 105 in 42.5 overs and by stumps on Tuesday, the Graeme Hick XII was floundering at 96/7.

Australia’s pre-Ashes warm-up game was designed to see how many from a squad of 25 would be culled into a final Test pool of 16 for the series with England next month, with Paine hoping to become the first successful series-winning Australian captain in the country since 2001. No Australian team since Steve Waugh won the Ashes 4-1 in 2001 has claimed the historic little urn on English soil.

On day one of this fixture, the Haddin XII comprising a bulk of Australia’s anticipated Ashes top order was undone by sharp movement from the Dukes ball. David Warner (4), Marcus Harris (6) and Travis Head (1) all fell inside the first hour of the match as the Haddin XII slumped to 21/3 with Neser and Bird doing early damage. Labuschagne resisted with 41 from 81 balls, but during the afternoon session his team was dismissed for 105.

When the Hick XII came out to bat, their batsmen were also undone by movement and pace. In his first over, Cummins struck Cameron Bancroft in the groin with a delivery that zipped sharply off the pitch and hastened medical treatment. Cummins’ three wickets were Bancroft, Steven Smith (bowled for 9 off 18 balls) and the in-form Matthew Wade.

Australia will name their Ashes squad on Friday after this game ends. The first Test is from August 1 at Edgbaston. 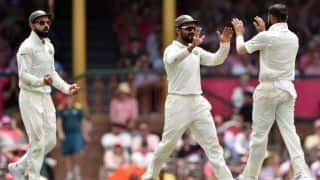