In his first Shield appearance since the 2016-17 final, Pattison nipped out thee big wickets on day three at the MCG.

The impact that returning fast bowler James Pattinson has had for Victoria during their ongoing Sheffield Shield game against South Australia augurs well for Australia leading into the 2019 ICC Cricket World Cup and the Ashes that follow.

In his first Shield appearance since the 2016-17 final, Pattison nipped out the big trio of Callum Ferguson, Jake Lehmann and Tom Cooper en route to figures of 9-2-24-3 on day three at the MCG, a successful start as he returns to competitive cricket. He had bowled eight wicketless over for 32 runs in the Redbacks first innings.

The 28-year-old has set the 2019 Ashes in England as his target comeback, having undergone back surgery last November after a series of injuries.

“Obviously I’ve made some mistakes of looking too far ahead before,” he said last week ahead of Victoria s match at the MCG. “If you try too hard and want too much early, then obviously you can take a backward step. You have to have a big goal and obviously that [the 2019 Ashes] is the biggest goal. I’m not hanging my hat on it or anything like that – just thinking, take small steps.”

Pattinson played the last of his 17 Tests in February 2016, against New Zealand. His return to first-class cricket for the first time since June 2017 will interest the selectors, given the potential Pattinson displayed over 36 international matches for Australia, from which he has 89 wickets.

Pat Cummins and Josh Hazlewood returned to international cricket on Sunday in the first ODI against South Africa, where the fourth fast bowler was Nathan Coulter-Nile who opened the bowling ahead of Mitchell Starc. With Billie Stanlake in the ODI squad and Pattinson and Jason Behrendroff returning to domestic cricket, spaces are heating up ahead of the World Cup and Ashes in England next summer.

“We ve got a wealth of fast bowling talent at the moment and fortunately everyone is fit and firing which is always the hardest challenge,” Cummins said on Sunday in Perth. We ve got still about 15 games before the next World Cup. By no means the XI, or even the 15, is settled and we ve got to all be performing to get on there.” 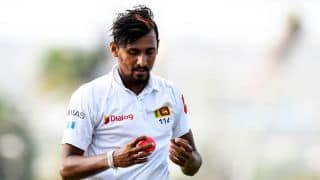 We should have played the ball on merit: Fabian Allen