Bangladesh have added left-handed batsman Soumya Sarkar to their ODI squad for the third and final match against Zimbabwe.

Bangladesh have added left-handed batsman Soumya Sarkar to their ODI squad for the third and final match against Zimbabwe. Sarkar was also called-up midway through Asia Cup last month to add more batting power to a struggling Bangladesh squad after injury to opener Tamim Iqbal.

Despite scoring a century in a warm-up match prior to the three-match ODI series against Zimbabwe, he was snubbed. He has been included to test him out at No.3 and No. 7 spot.

“There are still some places that are up for grabs in the ODI set-up and we are just trying to see how fits in there.” BCB Chief selector Minhajul Abedin was quoted as saying by Cricbuzz on Wendesday.. “We are not considering him to open the innings instead we will be keen to see how he reacts at No. 3 or 7.”

He further added,”Look we need to see what we really need at No. 7. We are yet to decide about it considering whether we need a batting all-rounder or bowling all-rounder. You cannot forget that Soumya has certainly developed as a bowler while he has scored quite consistently in the recent past to make us notice him.”

Bangladesh currently lead the series 1-0 with the second ODI being played today in Chittagong. The third and final ODI will be played on Friday at the same venue. 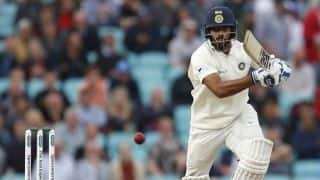