Bangladesh can bring in Taijul Islam for left-arm spinner Arafat Sunny who failed to get a wicket against England.

Hamilton: Bangladesh will seek to exploit New Zealand’s weakness against spin and halt the co-hosts’ unbeaten run when the teams meet in the ICC Cricket World Cup 2015 in Hamilton on Friday. Bangladesh surprised everyone by knocking out England with a hard-fought 15-run win on Monday to earn a place in the quarter-finals for the first time. Top 10 batsmen in ICC Cricket World Cup 2015

The Tigers’ assistant coach Ruwan Kalpage believes the team can carry that momentum into the game against New Zealand who have already wrapped up Pool A as group winners. “We want to go into the quarter-finals unbeaten from the last match and our players look forward to that on Friday,” said Kalpage, who predicted the Seddon Park pitch will help spinners. Top 10 bowlers in ICC Cricket World Cup 2015

Kalpage, himself a reputed former Sri Lankan spinner, warned his bowlers will have a plan against Black Caps skipper Brendon McCullum who has hit three half-centuries in his team’s five wins, including an 18-ball fastest fifty in all World Cups against England. “He (McCullum) has not had to start against spinners,” said Kalpage. “It will be tough for us but we have plans for him. I’m pretty sure it (the pitch) will help the spinners.” Top 10 fielders in ICC Cricket World Cup 2015

Bangladesh can bring in Taijul Islam for left-arm spinner Arafat Sunny who failed to get a wicket against England. Taijul got four wickets including a hat-trick on his one-day debut against Zimbabwe at home last year — the only bowler to achieve the feat in his first match. Top 10 wicketkeepers in ICC Cricket World Cup 2015

Besides the spin, Bangladesh’s pace bowlers have also come of age in the tournament, especially Rubel Hossain who was at his best with 4-53 against England. Hossain can take inspiration from his six for 26, including a hat-trick, against New Zealand at home two years ago. But Bangladesh have never won a one-dayer in New Zealand in six outings, having also lost all three World Cup matches against their opponents. ICC Cricket World Cup 2015: Pool-wise Team Standings

Still, New Zealand will not relax and reckon Bangladesh are decent opponents. “They are a decent side,” said coach Mike Hesson. “We’re in the middle of a World Cup (so) it’s not a matter of thinking about tomorrow. It’s a matter of making sure we don’t drop the ball and keep putting in good performances.” ICC Cricket World Cup 2015: POINTS TABLE

New Zealand will also hope their key batsman Kane Williamson, spinner Daniel Vettori and all-rounder Grant Elliott overcome from a stomach bug they caught after the team’s last match against Afghanistan in Napier on Sunday. Vettori and Elliott recovered in time but Williamson missed practice on Wednesday although he is expected to be fit by Friday. New Zealand hope middle-order batsmen Ross Taylor and Elliott score some runs before the knock-out stages. Taylor has 53 runs and from just 90 balls faced in five matches while Elliott has 77 runs off 94 and wicketkeeper Luke Ronchi only 47 runs off 36.

Bangladesh will want opener Tamim Iqbal to cope with the new ball to allow in-form Mohammad Mahmudullah, who hit his country’s first World Cup hundred against England, and the experienced duo of Mushfiqur Rahim and Shakib Al Hasan to give solidity and a decent total. Bangladesh are currently fourth in the table and if they finish in that position on Friday they will face defending champions India in the quarter-finals. ICC Cricket World Cup 2015: Complete Coverage 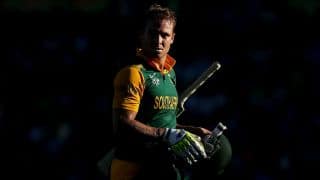