Kathal Bagan officials had apparently given seven leg-before wicket decisions, but that did not reflect on the scorecard.

The Bangladesh Cricket Board (BCB) has been rocked with a controversy, when a lower-tier domestic league raised the issue of digital manipulation in their scorecards. Kathal Bagan Green Crescent Club lost their match against North Bengal Cricket Academy by 7 wickets and were therefore relegated to the third division for the first time in 28 years. This was also the first time ever the club was relegated to the lower division. Kathal Bagan officials had apparently given seven leg-before wicket decisions, but that did not reflect on the scorecard. The New Age took different screenshots of the scorecard, which reflected six, five and four LBW decisions. Kathal Bagan manager said that this was purposely done as it would give an impression that it was a fair match. READ: Australia tour of Bangladesh: CA, BCB in negotiation over timing, format

We are lost for words, don t know what to say about it, he said, according to newagebd.net. According to the official scorer Habibullah said that there were actually five LBW decisions. There could be some mistakes in digital scorecard. But we amended that, he said. BCB umpires committee-in-charge Ovi Abdulah al Noman said that he had not received any complaints regarding this, but he will look into it once he receives it. We have not received any official complaint yet. When there will be complain we will definitely look into the matter, said Noman. READ: Bangladesh unlikely to tour Pakistan for T20I series

Nazmul Karin, BCB s umpire s committee chairman could not be contacted as he is currently in Sri Lanka. Sailab Hossain BCB umpire s committee s member s said, It is unthinkable to see three different scorecards of the same game. We have not received any complaint. If we get the complaint we will look into the matter. 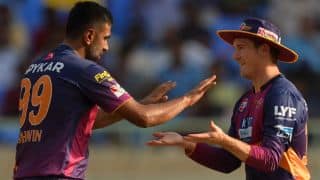