Mahmudullah's scored his 2nd ODI ton as NZ conceded their highest total in the tournament.

Bangladesh finished on a score of 288 for the loss of seven wickets after 50 overs at the end of their innings against New Zealand during their ICC Cricket World Cup 2015 Pool A match at the Seddon Park in Hamilton on Friday. Mahmudullah and Soumya Sarkar were the stars of the Bangladeshi batting performance, scoring 128 and 51 respectively, while Corey Anderson was the pick among the New Zealand bowlers with figures of two for 43 from his quota of 10 overs. Live Scorecard: Bangladesh vs New Zealand

New Zealand earlier won the toss and skipper Brendon McCullum elected to bowl. There were changes in both sides, with New Zealand bringing Mitchell McClenaghan in for his first game in the tournament, coming in place of Adam Milne. Bangladesh, on the other hand, missed out on the services of regular captain Mashrafe Mortaza, with Shakib Al Hasan taking up the responsibility in his stead. Nasir Hossain filled up the void left by Mortaza, with Taijul Islam being the other player to be drafted into the playing eleven, coming in place of Arafat Sunny.  Live Updates: Bangladesh vs New Zealand

Bangladesh were off to a miserable start, losing opener Imrul Kayes for a score of two off 19 balls after he was bowled by Trent Boult, with the scoreboard reading four for the loss of one wicket. Tamim Iqbal, who scored an impressive 95 in the match against Scotland at Nelson, was next to go, getting caught by Corey Anderson to give Boult his second wicket of the innings. New Zealand were in firm control of things as Bangladesh were 27 for two in the 10th over. ICC Cricket World Cup 2015: Complete Coverage

It was Sarkar and Mahmudullah, who once again came to the rescue for Bangladesh. The pair began to steady the innings, before getting the big hits at regular intervals to improve the run-rate, which was less than three runs per over for most part of the Bangladesh innings so far. The duo had  added 86 runs for the third wicket against England in their previous game at Adelaide after their team were reeling at eight for two. Sarkar brought up his maiden One-Day International (ODI) fifty in 55 deliveries, as the pair added 90 runs for the third wicket. Sarkar was ultimately caught by Anderson off the bowling of Vettori. ICC Cricket World Cup 2015: SCHEDULE & MATCH DETAILS

The Bangladesh innings was steered mainly by Mahmudullah thereafter. Shakib Al Hasan and Mushfiqur Rahim played quickfire cameos during their short stays at the crease, scoring 23 and 15 respectively before their dismissals. Mahmudullah however smashed 11 fours and two sixes as he sailed away to his second ODI century, becoming the first ever Bangladesh batsman to score back-to-back hundreds in a World Cup. Mahmudullah was well-supported by Sabbir Rahman during the sixth wicket partnership, worth 78 runs. Rahman smashed five fours and two sixes during his stay at the crease. ICC Cricket World Cup 2015: POINTS TABLE

It was an forgettable day for the New Zealand bowling attack, who have bowled out of their skin to terrorise opposition batsmen through out the tournament. The likes of Boult, who had caused the early damage, and Southee had no answer for Mahmudullah’s impeccable strokeplay. The fielding was average too, with the Black Caps experiencing rare goof-ups. McCullum may have also used up the overs of his main bowlers too early, with Grant Elliott having to bowl in the death overs instead of Boult.  Mahmudullah, in the meantime, became the first Bangladesh batsman to break into the list of top-five batsmen in the tournament. Top 10 batsmen in ICC Cricket World Cup 2015 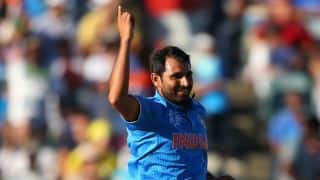