Bangladesh are currently 253 for 6 at stumps on Day One of second Test versus Australia.

When they took field to take on Bangladesh for the second Test, not only did Australia have to save their pride, they also have to prevent themselves from following to a record low in the ICC Test rankings in 28 years. Monday, the first day of the second Test at Zahur Ahmed Chowdhury Stadium, Chittagong, saw Bangladesh turn tables and get on top. They finished on 253 for 6 after being reduced to 117 for 5, and will certainly want to capitalise on that. Let us have a look at the highlights the Day One produced.

Glenn Maxwell drops Tamim Iqbal: Tamim was only on 6 when Pat Cummins found his edge. The ball went straight to Glenn Maxwell at slip and popped out. Thankfully, it did not hurt Australia for long.

Lyon s three wickets before lunch: Nathan Lyon pushed Bangladesh to the back-foot in the first session with a three leg-before decisions that went in his favour. He first got Tamim, who had played two crucial innings in the opening Test at Mirpur. Tamim scored 9. Tamim was followed by Imrul Kayes (4) and at the stroke of lunch, Soumya Sarkar (33). The score read 70 for 3 at lunch.

Sabbir Rahman s stellar 66: After nearly two sessions of attritional cricket, Sabbir turned things around with some uninhibited strokes. He played around the wicket for his 66, and dominated a 105-run stand with Mushfiqur Rahim. He was out unfortunately, trying to pull, overbalancing, and getting stumped in the process.

Mushfiqur Rahim s unbeaten 62: Mushfiqur dropped anchor while Sabbir played his shots, and took over from Sabbir once the latter fell. He is unbeaten on 62, and will definitely be eyeing a big score, possibly a century, to propel Bangladesh to a respectable total in the opening innings. His partnership 0with Sabbir helped Bangladesh recover from 117 for 5. However, he must watch out for the early morning conditions on Day 2 and Lyon.

Lion-hearted Lyon: Australia s star of the day was undoubtedly Lyon, who picked up 5 for 77. Lyon had pushed Bangladesh to the back-foot before they began their recovery process. He toiled hard under the sun, earning every single wicket of his with relentless perseverance. Australia will have to bank on him if they want to restrict Bangladesh to under 300. 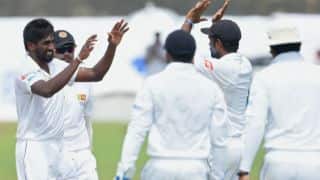 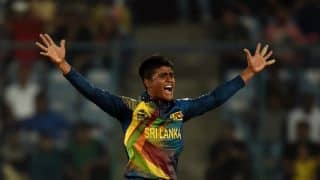