Peter Handscomb and David Warner added 152 runs for the third wicket in the second Test versus Bangladesh.

The longer format grills players in many aspects. After all, it is termed as ‘Test‘ cricket for a reason. ODIs and T20Is have their own charm and competitiveness, but there should be no questioning the purest format. The long and hard-fought sessions, shine of the red cherry, sweating it out for long hours with the bat and running the long yards with the ball keeps players are on their toes constantly. Peter Handscomb, at the age of 26, must have realised that no matter how many swashbuckling innings he may stitch in the shorter formats, he will always cherish his invaluable 82 off 144 balls against Bangladesh in the ongoing series decider of the two-match series at Chittagong. The youngster, after all, lost 4.5 kgs during his hard-fought innings. Will the other two formats extract so much from a player?

Handscomb finished Day Two unbeaten on 69 (off 113 balls) and took several breaks in between; thereby struggling to cope up with the extremely hot and sultry conditions. Australia needed a strong reply after Bangladesh’s first innings folded for 305 on Tuesday. In reply, they were 98 for 2 when Handscomb joined David Warner in the middle and survived the day amidst Bangladesh’s spin attack and humidity. The right-hander eventually batted for 185 minutes alongside Warner, adding 152 runs for the third wicket and keeping his team in control of proceedings.

Handscomb, not used to the intense heat, doubled-over and dry-heaved on the Chittagong pitch. With the temperature peaking 30 degree Celsius and humidity levels reaching 80 per cent, the Australian asked for several breaks but remained adamant to carry on for the team’s cause. Darren Lehmann was in full praise for his efforts after end of Day Two.

Pat on the back

Lehmann said “Really gutsy, Obviously it was pretty hot out there, and we saw that yesterday. You have to work really hard for your runs so, to get through in the way they played, was excellent. They re in the ice baths now. We ll leave it with the medical team to get them right for tomorrow (Day Three) but a very special day and, hopefully, tomorrow they can kick on.”

Handscomb, however, was the first wicket of the ongoing Day Three. 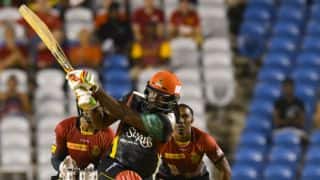