Australia are 36 for no loss after five overs against Bangladesh in the run-chase.

Australia have started off their run-chase of 154 against Bangladesh with David Warner and Aaron Finch taking the attack to the bowlers. This is their last game in the ICC World T20 2014 as they have been knocked out of the competition. Bangladesh are also out and this makes the result of this game immaterial to the fate of the competition.

Warner and Finch have started off by being attacking, but at the same time, have maintained their calm. Warner has been a bit inventive, trying the sweeps and even getting a reverse sweep to the boundary. There was a dropped chance in the fourth over though as a skier fell to ground as the fielder ran behind from mid-wicket.

In five overs, Australia are 36 for no loss. Earlier in the day, Bangladesh scored 153 thanks to Shakib Al Hasan and Mushfiqur Rahim. Finch is batting on 15 and Warner is on 20. 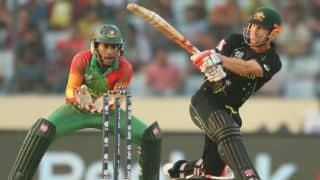