Bangladesh narrowly lost the first Test by 22 runs against England at Chittagong.

After narrowly losing the first Test at Chittagong against England, Bangladesh are set to clash for the series decider match at Mirpur on Friday. The live cricket streaming of the match is available on Hotstar, while the live telecast of the match is available on Star Sports 2 and Star Sports HD 2. England are certainly in the driver s seat winning the One-Day International (ODI) series and now almost on the brink of winning the 2-Test series. The series deciding match will provide the result of whether Bangladesh manages to level the series or if England clinches the series like a boss. FULL Cricket Scorecard: Bangladesh vs England, 2nd Test at Mirpur

Bangladesh lost the first Test by mere 22 runs, which could have won by Bangladesh if their debutant Sabbir Rahman continued to stay on the crease and help his side to victory. Bangladesh skippered by Mushfiqur Rahim fought back and showed confidence against England. Bangladesh called three debutants to their side in form of Mehedi Hasan, Rahman and Kamrul Islam Rabbi. Hasan and Rahman flourished on their debut as Hasan took a fifer while Rahman scored his maiden half-century. ALSO READ: Bangladesh vs England, 2nd Test at Mirpur, Preview and Prediction

On the other hand, England saw Ben Duckett making his debut and unable to produce the required runs at the top along with skipper Alastair Cook. With no James Vince and Alex Hales on the side, Duckett was expected to fire in the first Test. However, England will miss out on one of their bowlers Stuart Broad and will have Zafar Ansari take the place, making his debut for the national side. Broad was to receive his 100th Test cap and might have to wait for the next match to secure the same. In absence of James Anderson, Broad was the only experienced bowler on the side. Garenth Batty, who returned after 12 years, also failed to pick any wickets.

Bangladesh will want to shrug off their defeat and level the series focusing on better batting as well as bowling display. 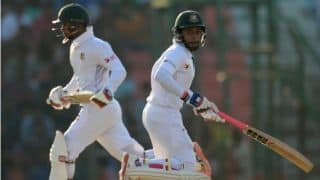 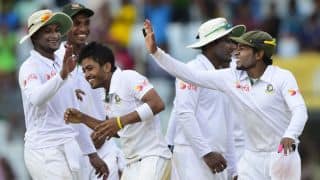