Elliott was caught by Taskin Ahmed off the bowling of Rubel Hossain.

New Zealand lost their fourth wicket with 210 runs on board when Grant Elliott was dismissed for a score of 39 off 34 balls during their ICC Cricket World Cup 2015 Pool A match against Bangladesh at the Seddon Park in Hamilton on Friday. Elliott was caught by Taskin Ahmed off the bowling of Rubel Hossain, as the Black Caps needed 79 runs from 66 balls. Live Scorecard: Bangladesh vs New Zealand

Bangladesh earlier finished on a score of 288 for the loss of seven wickets at the end of 50 overs, with Mahmudullah being the highlight of the innings with his second consecutive One-Day International (ODI) century. Soumya Sarkar and Sabbir Rahman too came in handy with the bat, with Sarkar scoring his maiden ODI fifty, sharing a 90-run stand with Mahmudullah for the third wicket to pull his side out of early trouble. Rahman scored a quickfire 40 off 23 balls, including five fours and two sixes. It was an off day for the New Zealand bowlers, with Corey Anderson emerging with the best figures, capturing two wickets for 43 runs in 10 overs. Live Updates: Bangladesh vs New Zealand

New Zealand earlier won the toss and elected to field. Both teams announced changes in their playing elevens, with the Kiwis opting to replace Adam Milne with Mitchell McClenaghan, who was yet to play a match in the ongoing competition. Bangladesh were without the services of skipper Mashrafe Mortaza, with Shakib Al Hasan taking up the responsibility of captaincy and Nasir Hossain filling in the void. Taijul Islam was the other player to fill in the void, coming in place of Arafat Sunny. ICC Cricket World Cup 2015: Complete Coverage 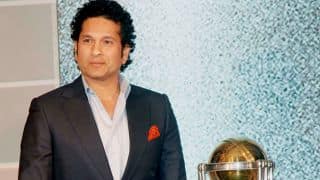