Bangladesh will hope for a turnaround in ODIs after being thrashed in the two-Test series against South Africa.

They were demolished in the two-Test series. Questions were raised on their attitude and fighting spirit playing on alien conditions. The captain faced a plethora of questions, and is even on the verge of losing his job. Will the tamed ‘Tigers’ strike back in a format which has built their reputation over the years? With limited-overs skipper, Mashrafe Mortaza back in the squad, Bangladesh will like to give it back to South Africa in the series opener of the three ODIs. On the other hand, South Africa embark on a new journey with a fresh captain-coach pair keeping World Cup 2019 in mind. In addition, they will also wish to regain the No. 1 rank in ICC ODI rankings.

Bangladesh and South Africa last met in an ODI in 2015. Since then, Bangladesh have continued to climb upwards in the shorter format. Bangladesh in fact beat them in the series. On the other hand, Proteas have won 4 bilateral series and lost just one. However, they have continued to disappoint when it comes to major tournaments. In fact, their last 5 ODIs read: L, L, W, W, L. Faf du Plessis and Ottis Gibson will back their key players, and tinker with the line-up wisely with the next mega event two years down the line. South Africa just cannot afford to win bilateral series, and falter in ICC events. The duo will like to ensure a better environment, and reason out their follies in high-pressure encounters.

From Bangladesh’s perspective, Mortaza’s presence will boost the camp after the mauling received in whites. His aggression will instill confidence in the camp. In addition, Shakib Al Hasan will also handle the spin department and bolster the middle order. All eyes will be on Tamim Iqbal. He missed out on the second and final Test due to injury, and will retain his slot at the top. Nonetheless, Bangladesh will also be eager to see the likes of Liton Das, Sabbir Rahman, Imrul Kayes and Soumya Sarkar take more responsibility.

Ottis Gibson, head coach : “We’re looking at 34 or 35 games between now and the 2019 World Cup and the idea between Faf, the selectors and me is to have a look at players who might be on the fringes.We also need to determine the type of players, bearing in mind the conditions in England, that we’re going to need. They need opportunities for the next year so that we can make better judgements going forward. Then we finally need to narrow down to 15 or 16 players we feel can play at the World Cup. It’s still a long way but that’s the plan.

Minhajul Abedin, chief selector: “We had some good discussion among us as we opted to ease the environment. I think we are getting everything under control and with the arrival of two senior cricketers, naturally the strength of squad is bolstered. We need to forget the Test series and look forward to the ODIs. Definitely we feel that we have a good chance in it [ODIs] considering our strength [lies] in this format But the most important thing is to pick up momentum and that too through this practice game”.

– Bangladesh have won 3 out of 17 ODIs versus South Africa.

– In Proteas’ den, Bangladesh have lost all their 6 ODIs.

– AB de Villiers’ highest score versus Bangladesh is 69*. Will he register his maiden ton against the subcontinental side? 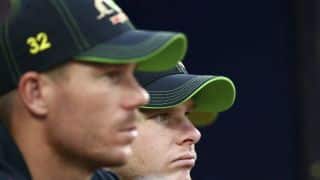