The live cricket streaming of Bangladesh vs Sri Lanka 2017, 2nd Test, Day 1 is available in India on SONY LIV.

Following a disappointing 259-run loss in the opening Test, visitors Bangladesh get set to take on the might hosts Sri Lanka on Day 1 of the second and final Test at the P Sara Oval in Colombo on Wednesday. The live cricket streaming of the match is available in India on SONY LIV, while the live telecast of the match will be available on Ten 1 HD and Ten 3. As for the live telecast in other countries it will be as follows: BTV in Bangladesh, PTV Sports in Pakistan, OSN Sports in Middle-East and Willow TV in USA. While Bangladesh would aim to square the series, Lanka would look to inflict a whitewash. Full Cricket Scorecard: Bangladesh vs Sri Lanka, 2nd Test at Colombo

The second Test holds historical significance for Bangladesh, as it will be their 100th Test appearance since making the debut in 2000. Though the Tigers, as they are fondly called by their fans, have improved by leaps and bounds in limited-overs cricket, the journey in Test cricket in last 17 years has been disappointing for Bangladesh. No team has lost more games than Bangladesh in their first 99 Tests. Bangladesh s abysmal record in Tests reads: 8 wins, 76 defeats and 15 draws. Though they have won 1 more Test than New Zealand, who had 7 wins in their first 99 Tests, their losses outnumber any other side s by far: New Zealand had drawn 47 out of their first 100 Tests, losing 46.

The conditions in Colombo are expected to be hot and humid throughout the five days. Though there is forecast for rain and overcast conditions on Day One, the remaining four days are going to be bright and sunny. The wicket at P Sara Oval will crack as the game progresses and there will be turn on Days Four and Five. The team winning the toss would like to bat first. 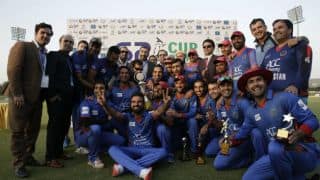