West Indies beat Bangladesh by eight wickets in the first T20I at Sylhet on Monday.

Left-arm pacer Sheldon Cottrell delivered a career best 4/28 as West Indies bowled out Bangladesh for 129 in 19 overs and chased it down with eight wickets and 55 balls remaining, giving them a 1-0 lead in the three-match T20Is series at Sylhet on Monday.

On his first T20I since January, and first international since July, Cottrell claimed the wickets of Tamim Iqbal, Soumya Sarkar, Mahmudullah and the innings’ top-scorer Shakib Al Hasan. He was named Man of the Match, the first time in 16 international appearances that he has won this.

“Was definitely not easy. We had to be smart with the ball. Oshane [Thomas] executed well in the first six,” he said after the win. “Bangladesh did play some poor shots, but we did bowl well. I’m a soldier back in Jamaica, so it’s a way to show [his signature salute after a wicket] my appreciation for them.”

His captain Carlos Brathwaite was pleased to have led West Indies to their second win in six matches on tour, but knew the series was not won yet. This past summer, after blanking Bangladesh 2-0 in the home Tests, West Indies gained leads in the ODI and T20I contests but were beaten 1-2 in both.

“Very very good win, but it’s only one game. We won the first game in the Caribbean too, but we lost the series, so we need to be respectful of the series,” said Brathwaite. “While we celebrate the victory, work is not done. We wanted to be aggressive, wanted to overpower them. It doesn’t always happen.

“Some days we can easily be 30/3, but this is how we want to play, so when things are going up, you go for it. This is a template. Dhaka will be slower, and Bangladesh are a top international team, so all hands on deck for the next two games.”

Shakib played a lone hand to hit 61 off 43 balls but lacked support from the other end, after heelected to bat first.

“Everything went wrong today other than the toss. We didn’t bat well and didn’t bowl well,” said Shakib. “It was a good surface, we should’ve scored at least 175. You must ask the other batsmen why they didn’t bat well. I can’t answer for everyone. As I said, nothing worked out today. Whatever we did, it didn’t click. A lot to learn from this game.”

The second T20I is on Thursday at Mirpur. 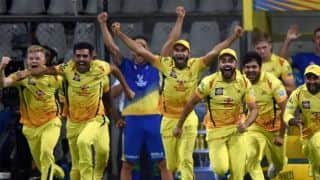 Ranji Trophy 2018-19, Elite B, Round 6, Day 4: Gnaneswara Rao’s century in vain as Himachal thrash Andhra by innings and three runs