Imrul Kayes was given lives on 0 and 16 before he was dismissed for 44 on the stroke of lunch at Chittagong.

Bangladesh lost Imrul Kayes for 44 on the stroke of lunch on day one of the first Test against West Indies in Chittagong to head into the break on 105/2.

Having been rocked by the departure of the returning Soumya Sarkar for a duck off the second ball of the Test, Bangladesh were carried through a century stand between Kayes and Mominul Haque who was batting on 53 at lunch.

Shakib Al Hasan returned to lead the hosts and chose to bat on Thursday, but it was West Indies who found early lift when Sarkar nicked Kemar Roach to Shane Dowrich. Imrul was then given two lives, first on 3 when Roston Chase dropped a simple catch at slip off Roach and then on 16 when he slog-swept Jomel Warrican out to deep square leg where the catch was taken, only for replays to show that the spinner had over-stepped.

Mominul was attacking early on, hitting Chase for three fours in one over and driving and cutting with panache. He reached his fifty in 69 balls.

On 44, Kayes went back and turned a ball from Warrican to short leg where Sunil Ambris held a good catch. That ended a stand of 104. 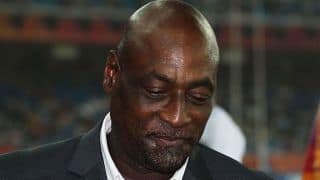