The experienced wicketkeeper-batsman bruised a finger during indoor training and was rested on Thursday.

The injury sustained by Mushfiqur Rahim during practice on Wednesday is not expected to keep him out of the second Test between Bangladesh and West Indies starting Friday at Mirpur, but as a precaution the selectors have added wicketkeeper-batsman Liton Das as cover.

Mushfiqur bruised a finger during indoor training, but the Bangladesh team doctor dismissed doubts over him missing the second Test. Mushfiqur was rested from training on Thursday, and Liton – who played the recent Zimbabwe series before he was dropped for West Indies – recalled.

He (Mushfiqur) hurt his finger a little. The good news is X-ray reports did not show any sign of fracture. I don think it would be grave anyhow. But as a precaution, we have rested him for the day, said Debashish Chowdhury.

Bangladesh opener Mominul Haque added that Mushfiqur was on track to play at Mirpur. I hope he is alright. As far as I am informed, he will play even if the finger is broken. However I don t think it s anything of that sort. Hopefully he will recover in time, said Mominul.

During the second Test against Zimbabwe earlier this month, which Bangladesh won to share the series 1-1, Mushfiqur became the first Bangladesh batsman to score two Test double-centuries.

Liton scored 24, 9, 23, 9 and 6 in four Test innings against Zimbabwe. Back in domestic cricket since then, he made 0 and 84 for Central Zone versus South Zone in the four-day Bangladesh Cricket League. 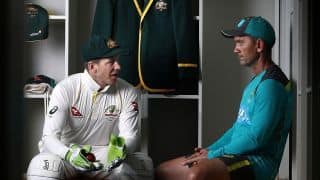