Hetymer's 42-ball fifty revived West Indies after they had lost half their side for 88 runs on day two in Chittagong.

A blazing half-century in 43 balls from Shimron Hetmyer gave West Indies some lift even as their struggles against spin continued for a second session running as Bangladesh grabbed firm control of the first Test in Chittagong by leaving the visitors 187/6 by tea on day two.

In the morning, the left-arm spinner Jomel Warrican had taken the last two Bangladesh wickets for the addition of nine runs to the overnight total. Ambris got the Nayeem for 26 and Mustafizur Rahman for 0 to finish with 4/62, leaving Taijul Islam not out on a vital 39.

Taijul was soon into the act with his left-arm spin, snapping a 29-run opening stand by getting Kieran Powell lbw for 14. Immediately Shakib Al Hasan brought himself on and with his first delivery bowled Shai Hope for 1 who looked to drive against the turn. Mushfiqur Rahim then dropped a catch off Sunil Ambris, but Shakib lifted the mood when he had Kraig Brathwaite edging to first slip as the over ended with two wickets.

From 29 without loss, West Indies had slipped to 31/3 inside two overs.

Roston Chase led a stand of 46 before he became Hasan s first wicket, out for 31 when stabbing a catch to short leg. Nayeem got another in his next over when Ambris gambled on an lbw review and was unsuccessful. Two wickets had fallen for the addition of 11 runs in 17 deliveries.

Hetmyer decided to attack, and did so successfully. Hasan was flat-batted for four past mid-on and then Hetmyer targeted Taijul and swung him for successive sixes to the leg side. A bent-knee slog off gave Hetmyer four more, then he attacked Hasan by hitting him for four and six. His fifty secured in 42 balls, Hetmyer then got stuck into Shakib whom he biffed over mid-off and then deposited over long-on.

Dowrich broke out of his shell with a controlled six off Mehidy with sparkling use of his feet, but had to shun any such extravagance when Mehidy produced a fine delivery to have Hetmyer stumped. 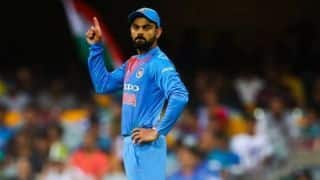