For Zimbabwe, this will be the last chance to retrieve something from an otherwise horrendous tour.

Having hit the rarest purple patch as a team, Bangladesh for once haven’t had a single goof up since the first Test against Zimbabwe, which they somehow managed to win by a whisker. After a clean sweep in the tests, they were hoping for an encore in the One-Day Internationals (ODIs) and they have been largely successful. Their victory margins were consistently comprehensive as the tour unfolded. Now, they take on Zimbabwe in the third match with the intention of closing the series. For Zimbabwe, this will be the last chance to retrieve something from an otherwise horrendous tour.

Bangladesh have had a measure of Zimbabwe under the second coming of Mashrafe Mortaza as their ODI skipper. The most encouraging aspect of Bangladesh’s demolition of Zimbabwe has been the consistent ruthlessness of it, something you seldom associate with them. They haven’t let their foot off the pedal.

If they can close the series in the third ODI, it will leave them the luxury to experiment in the last couple of matches, although for a team that’s tasted success so sporadically, developing a winning habit is essential and so they must guard against complacency.

Zimbabwe, on the other hand, are overly dependent on Hamilton Masakadza and Brendon Taylor to come good in order for them to even compete, let alone win. Their abject surrender to Bangladesh is also quickly erasing memories of their win over Australia in ODI few months ago.

Their problem is the same old nagging one — the inability to play spin bowling. It hasn’t helped that they’ve had to tackle the Bangladeshi spinners under pressure in run chase situations. Perhaps simply winning the toss will be a good point to take things forward from as it may allow their batsmen to play with a little more freedom. To give Bangladesh a run for their money and to stay alive in the series, Zimbabwe require an innings of substance from their top order batsmen.

(Ankur Dhawan is a reporter with CricketCountry. Heavily influenced by dystopian novels, he naturally has about 59 conspiracy theories for every moment in the game of cricket. On finding a direct link between his head and the tip of his fingers, he also writes

Video: Phil Hughes collapses after being hit by bouncer 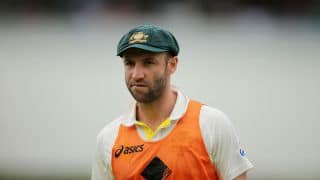