Zimbabwe failed to chase down a target of 217, falling 91 runs short in Match No.5 of the Bangladesh Tri-Nation series against the hosts.

Zimbabwe failed to chase down a target of 217, falling 91 runs short in Match No.5 of the Bangladesh Tri-Nation series against the hosts. Zimbabwe had a poor start, losing four wickets in the power play itself. It was the pair of Sikandar Raza and Peter Moor that added steadiness to the innings. Their 34 runs stand delayed the inevitable. For Bangladesh, it was Shakib Al Hasan, who stared with the ball, taking figures of 3 for 34. Mustafizur Rahman bowled an exceptional opening spell conceding just one run in his four overs.

The pair of Mashrafe Mortaza and Shakib shared the first four wickets, conceding 34 runs. The four wickets included the scalp of Brendan Taylor, who went for a first-ball duck. However, Raza and Moor kept cool scoring at run rate of 66.1 and 33.33 respectively. The Zimbabwean tail tumbled withing 41 runs. Raza was the highest run-scorer for Zimbabwe, scoring 39 runs.

Bangladesh managed to post a total of 216 in 50 overs. After electing to bat, it was Tamim Iqbal and Shakib’s half centuries along with some vital contribution by lower-order that enabled them to post a par score. After the first wicket, Shakib and Tamim added 106 for the second wicket.

Zimbabwe bowled well in the start but didn’t maintain the pressure giving away frequent extras. They bowled 15 extras in 50 overs. After getting the wicket of Tamim Zimbabwe reduced them to 168 for seven. The last three batsmen added 46 runs for Bangladesh. Graeme Cremer and Kyle Jarvis shared seven wickets amongst them.

Bangladesh have won all three matches in the series by bonus points. 216 is also Bangladesh’s fourth lowest total defended.

Tamim stood tall scoring 76 off 105. In the process, he became the only Bangladeshi batsman to cross 6,000 runs. He leading run-scorer for Bangladesh.

Cremer claimed four wickets, which included Tamim’s wicket. He even dismissed the Bangladesh captain for a duck. During the match, Cremer also became the fifth Zimbabwe bowler to take 100 wickets. He reached this landmark in 85 matches; quickest to this tally.

Zimbabwe may have lost the match, but they are still alive in the tournament. Zimbabwe’s net run rate is slightly higher than Sri Lanka, which will benefit them if the latter lose. Sri Lanka, however, only qualify if they win over Bangladesh or lose by a close margin. 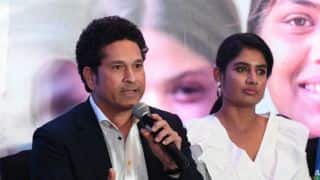