Shadman said he has not lost confidence from his half-starts in New Zealand which saw him finish with scores of 27, 29, 24 and 37 in the two Tests.

Bangladesh Test opener Shadman Islam said that his side are not focussing primarily on playing Rashid Khan for the one-off Test against Afghanistan which gets underway on September 5. ”We are not too concerned about him,” Shadman was quoted as saying by Cricbuzz on Wednesday.

”Bowling in Tests and shorter formats are different and we face lots of good quality bowlers in our domestic cricket. Though it might be slightly better in international cricket, I think if we play sensibly it won’t be a problem.

”I know Afghanistan have a good spin attack. I always work on handling pace bowling, but they have spinners like Rashid Khan, Mohammad Nabi, and they are good spinners with good variations. I think I should leave the ball that is spinning away and not go chasing at wide deliveries.”

Rashid-led Afghanistan will arrive Bangladesh on August 30. After the one-off Test, both nations will be engaged in a Twenty20 tri-nation series with Zimbabwe being the third team.

The focus now, however, is firmly on the Test series and how to face Afghanistan’s spin attack.

Shadman, who has played three Tests so far, said he has not lost confidence from his half-starts in New Zealand which saw him finish with scores of 27, 29, 24 and 37 in the two Tests. ”Maybe I was lacking in the New Zealand series. We don’t have bouncy wickets like them. So when next time I will go, I try to prepare according to that but for now you can expect (some runs). ‘I will try my best to make a big score.

I will try to play my natural game. I will play like I play in first-class matches or with A team. We have lots of four-day matches with the A team keeping in mind that there is a World Test Championship now. We were sent to India with BCB XI and we started out practice for this Test from there.” 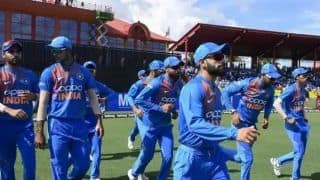