India will now need exactly 100 to win the match and level the series.

Barinder Sran was the star of the show as his four-wicket haul helped India restrict Zimbabwe to 99 for 9 in the second T20I at Harare. He surpassed Pragyan Ojha’s figures of 4 for 21 to register the best figures by an Indian on debut. Jasprit Bumrah too continued his good run of form to finish with figures of 3 for 11. Sran wrecked havoc right from the beginning as he removed Chamu Chibhabha for 14 after Ambati Rayudu took an excellent catch running backwards. He followed it up with wickets of Hamilton Masakadza, Sikandar Raza and Tinotenda Mutombodzi in his next over and became the only Indian bowler to pick up three wickets in a single over in T20Is. The wickets of Raza and Mutombodzi came off consecutive deliveries but he had to wait till the 18th over to bowl the hat-trick delivery, which was played out safely. Live Cricket Scorecard: India vs Zimbabwe, 2nd T20I at Harare

Peter Moor, who came in at No. 3, was fighting a lone battle. He managed get a few boundaries but wickets were tumbling at the other end. Malcom Waller for 14 to Yuzvendra Chahal and then Moor too departed for a hard fought 31 off Jasprit Bumrah. Bumrah then came back in the very next over and uprooted Elton Chigumbura’s middle stump. Couple of balls later it was Neville Madziva’s turn to face Bumrah’s wrath as his off stump went for a stroll. Live Cricket Updates: IND vs ZIM 2nd T20I at Harare

It seemed like just mere formalities in the end but the Indian bowlers were not able to bundle Zimbabwe out. the last wicket pair of Donald Tiripano and Taurai Muzarabani ensured that they played out the 20 overs. India have bounced back extremely well from their loss in the first match and will now hope that their batsmen chase this small total down without any hiccups.

It was Zimbabwe, who had won the toss earlier and decided to bat first. At the toss, skipper Graeme Cremer said that they are looking at a score of close to 170. Zimbabwe ‘keeper Richmond Mutumbami injured himself earlier and as a result misses out today. Moor will keep wickets in his absence. Sran and Kulkarni are the only two changes for India. They replace Rishi Dhawan and Jaydev Unadkat. 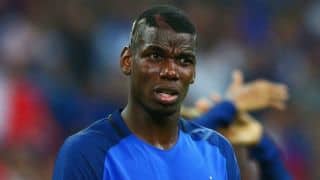 Paul Pogba: I have no answer to give to anyone