South Africa great Barry Richards has questioned whether the current policy of racial transformation will end with "merit selection".

Londres: South Africa great Barry Richards has questioned whether the current policy of racial transformation will end with “merit selection”. The policy is designed to cope with the legacy of apartheid, when largely only white players such as Richards, the outstanding opening batsman of the 1970s, were allowed to play for official South Africa sides. But the policy and its implementation have proved contentious amid suggestions that players have not always been chosen on merit and that some white cricketers, knowing their chances were in some way restricted, have instead chosen to pursue financially more lucrative careers with English county sides. ‘AB de Villiers should quit captaincy to prolong career,’ says Barry Richards

However, while transformation has seen the likes of Andile Phehlukwayo and Temba Bavuma possibly get their international chances earlier than expected, both have justified their selections in terms of performance. Richards, speaking ahead of next week’s first Test between England and South Africa at Lord’s, accepted it was a contentious issue. “It’s a difficult one,” said Richards at an event staged by series sponsors Investec. “South Africa has come from a history of what we know,” added Richards, whose own Test career was limited to just four matches because of the apartheid-induced sports boycott of South Africa.

As of last August, Cricket South Africa defined the policy as one where national teams should include on average and across all formats, six players of colour, of which two must be black African. The target at domestic level is a stricter six players of colour per side per match, of which three must be black African. But for many years the issue was not so well defined and Richards said: “I don’t think they [CSA] make it clear enough to the fans and then you have people on social media having a go at each other.” Barry Richards calls for legalising ball tampering

Far enough along the line

Richards’s globe-trotting career saw him play for a multi-racial Rest of the World side when South Africa’s 1970 tour of England was cancelled and open for Hampshire alongside West Indies great Gordon Greenidge. “From day one, when I came to play county cricket and I first met Garry Sobers, people like that, picking a team was on merit, I’ve always been of that opinion,” said Richards.

“Whether you can do that in the South African context… I think we’re now we’re far enough along the line to say we can pick it [the South Africa team] on merit. Where it’s causing a problem is a little further down the line. Then you’ve got this transformation policy where an Indian player like Hashim Amla becomes different from a black player like Kagiso Rabada in terms of team selection. It’s a machination of politics and sport, it’s always been a mix but never been a great mix. The transformation policy, I can see what they are trying to achieve, but whether they achieve the end goal of a merit selection remains to be seen.” Cheteshwar Pujara must look to fashion partnerships, says Barry Richards

There are several South African players who have effectively called time on their international careers in order to be classed as ‘home’ selections by counties under the so-called ‘Kolpak’ rule. Hampshire alone have two in fast bowler Kyle Abbott and top-order batsmen Rilee Rossouw. Neither they nor any of the other current ‘Kolpaks’ have specifically listed transformation as a reason for their decision but there are many who believe it played a part, just as South Africa-born batsman Kevin Pietersen said it was a factor in his move to represent England.

“You can understand, if you are a fringe player, Kyle Abbott is 29, not an automatic selection, ‘what do I do?’ ‘Should I go the Kolpak route?’,” said Richards. “There are 17 rand to the pound, it’s a temptation. I’m surprised more haven’t gone that route.” He added: “But the Kolpak players, your back-up players are very important. If those guys are saying we don’t like it because we might not be part of the set-up, that’s something else you’ve got to factor into how you implement transformation. It’s a problem and I’m not sure they [CSA] quite know what the solution is just yet.” 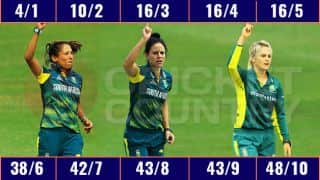 West Indies Women 48 all out against South Africa: How the wickets fell 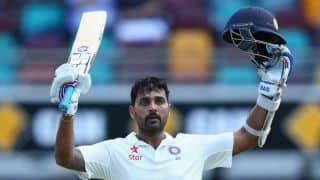