Paceman Stuart Broad struck twice to help England check Pakistan's progress after their openers put on a century stand on the second day of the first Test at the Dubai Stadium on Wednesday. 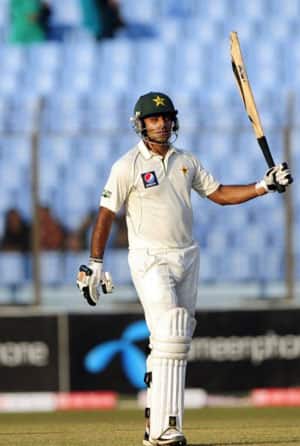 Paceman Stuart Broad struck twice to help England check Pakistan’s progress after their openers put on a century stand on the second day of the first Test at the Dubai Stadium on Wednesday.

The 24-year-old, who survived a foot injury on the eve of the match, provided his team the breakthrough after Mohammad Hafeez and Taufiq Umar hit attractive half-centuries to bolster Pakistan’s chances of taking a big lead.

Pakistan were 138 for 2 at lunch, with Hafeez on 70 and Younis Khan unbeaten on six, as they trail England’s first innings total of 192 by 54 runs.

Broad bowled Umar with a beautiful delivery which held its line and hit the off-stump, just one ball after Chris Tremlett dropped Hafeez off a miscued hook which resulted in a single.

Umar hit ten boundaries in his 58 and was sedate during his 113-ball stay at the crease, putting on 114 with Hafeez for the opening wicket.

Three overs later, Broad swung one away from Azhar Ali and had him caught behind by wicket-keeper Matt Prior, much to the jubilation of his team-mates. Ali made just one.

It could have been a more fruitful session for England had they been at their best in fielding.

Ian Bell failed to hit the stumps when Hafeez, batting on 44, ran for a single after pushing Tremlett to square-leg and was well short of his crease after being sent back by Umar.

Resuming at 42 for 0, Hafeez and Umar negotiated the pace-cum spin attack with confidence. Hafeez brought up Pakistan’s hundred when he hit Graeme Swann to the boundary.

It was Umar who reached his fifty first, hitting Swann for two consecutive boundaries to complete his 13th Test half-century. Hafeez reached his seventh with a single off Tremlett.

Hafeez has so far hit ten boundaries during his 127-ball knock.

England’s lone spinner Swann did get some turn, but was still wicket-less. Broad had figures of 2 for 35. (AFP)

I want to play for India, tweets Chris Gayle