Pakistan’s dynamic teen leg-spinner Shadab Khan will play in Australia’s Twenty20 Big Bash League with Brisbane Heat this year, the club said Thursday. Shadab, 18, has made impressive progress since his international debut for Pakistan last year, producing starring T20 turns in the Pakistan Super League and the Caribbean Premier League. He earned player of the match honours in his first two T20 Internationals for Pakistan against the West Indies, claiming 3 for 7 and 4 for 14. ALSO READ: Shadab Khan is gold to Pakistan cricket, says Mickey Arthur

“He is one of the most dynamic young spinners in the game and will fit nicely into the style of play that we want to employ this summer,” Heat coach and former New Zealand international Dan Vettori said. Vettori said Khan’s recruitment meant that the Heat would not contract West Indian wrist spinner Samuel Badree for the next campaign. Shadab, who is a Test old, has 9 wickets from 7 ODIs and has 10 from 4 T20Is at an impeccable 7.5 and a economy rate of 4.73. The BBL season starts on December 20. 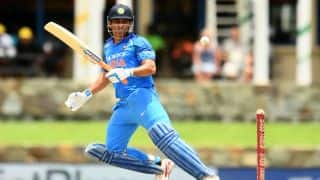 India vs Sri Lanka, 4th ODI: MS Dhoni vs records in line and other key battles