At the MCG, Short ended 96 not out after the umpire signalled leg-byes.

The Australia and Hobart Hurricanes opener D’Arcy Short is not dwelling on a missed hundred during the Big Bash League as he instead focuses on regaining his place in the country’s ODI team ahead of the 2019 ICC Cricket World Cup.

On Monday night at the MCG, Short ended 96 not out after the on-field umpire signalled four leg-byes instead of runs off the bat, followed by a mishit that yielded a single off the last ball of Hurricanes’ innings of 185/2 against the Melbourne Stars. On 91, the left-hander attempted a cheeky ‘draw shot’ whereby he clipped a yorker between his legs to the boundary.

“Unfortunately it didn t go my way with the umpire,” Short said with a smile after Hurricanes’ 59-run win. “That was his decision, I can t do anything (about it).”

We’re on century watch … and Short misses out on four runs after this is called leg byes #BBL08 pic.twitter.com/jZwhfL0m3f

The shot Short played is a tough one, with very few international cricketers managing to pull it off successfully. Short said he trains hard to perfect it during training.

“It s something that I ve worked on a little bit and identified if they re trying to go at my toes,” he said. “I don t really have the lap (sweep) so I ve got to have something to try and hit it down there (towards fine leg).”

Short’s unbeaten 96 off 57 balls is second half-century since he was dropped from Australia’s ODI squad earlier this month. Like fellow axed batsman Chris Lynn, Short has been instructed to improve his batting against spin and the 28-year-old showcased four sixes off spin on Monday.

“One of the things I had to work on was against spin and I just thought I’d go out and be confident against them and put the pressure back on them, which I did and it paid off,” said Short. “Stats speak for themselves. If I can be better against them, which hopefully I have, then hopefully I can get back in the ODI squad. It’s going well at the moment.” 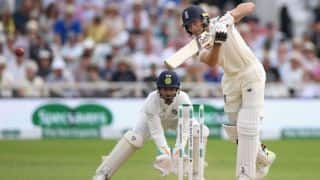 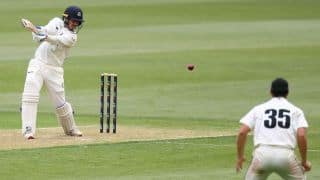