A scintillating batting effort from Matt Renshaw helped Brisbane Heat to a six-wicket win over Adelaide Strikers in a Big Bash League (BBL) match on Sunday. With the recent win, Heat, now on 11 points, are just one short of fourth-placed Melbourne Stars, who require just one win from their remaining three fixtures.

Chasing a stiff 177, Heat found themselves in trouble at 18/3 in the third over. However, a superlative 122-run partnership from Renshaw and Brendon McCullum for the fourth wicket proved to be the difference in the end. (ALSO READ: Michael Klinger set to leave Perth Scorchers)

Renshaw was unbeaten on 90 coming in just 50 deliveries, his innings laced with nine boundaries and four sixes. McCullum contributed with a valuable 51 off 39 before he was dismissed by Rashid Khan, who had to be content with just the one wicket.

Courtesy Renshaw s 90 not out and Alex Ross 25*, Heat chased down the target with eight balls to spare.

Earlier, in what was a complete team effort, Jonathan Wells top scored with 30, before Rashid (19 off 6) and Cameron Valente (19* off 8) struck some lusty blows to take the home side to a challenging total, but it proved to be insufficient with the highlight of the show being Renshaw s sublime knock. (ALSO READ: Lalor hat-trick, Lynn fifty seals comfortable win for Brisbane Heat)

Josh Lalor was the pick of the bowlers for the Heat, returning with figures of three for 25 in his four overs. Jack Prestwidge pocketed two for 38. 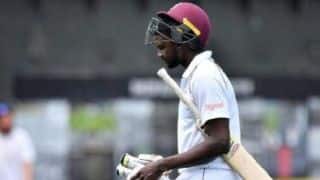