New Delhi: The BCCI on Wednesday adopted Lodha panel reforms partially, rejecting all major recommendations on good governance including age cap, tenure and cooling-off period at its Special General Meeting on Wednesday. Having got a shot in the arm from Supreme Court, which has agreed to hear the “practical difficulties” on August 18, BCCI did not implement the controversial reforms on age cap (70 years), cooling off (3 years) and tenure (9 years each at state and BCCI). Not accepting what was termed by Lodha Panel as principles of good governance is an indication that old guards Niranjan Shah and N Srinivasan manage to stay relevant despite disqualification. BCCI acting secretary Amitabh Choudhary on Wednesday said that they have unanimously adopted all but five reforms as per Supreme Court verdict on July 18, 2016. BCCI CEO Rahul Johri barred from attending SGM

2. Definition of powers of appointed executives.

3. Size and constitution of apex council.

4. Restriction and disqualification of office bearers and ministers and government officials, age, tenure and cooling off period.

Choudhary only explained why the disqualification of government employees and ministers was kept among their reservations. “If we want Railways or Services to retain full membership [voting] rights, then they can only be represented by either a government employee or a minister,” he said. On the size of proposed Apex Council, Choudhary said that “Currently, it’s proposed size is five members. It has only one vice-president and members are of the opinion that it is smaller in size considering the length and breadth of country.” Choudhary said that they are still in process of sorting out Conflict of Interest clause as there are a few objections from members. The BCCI has also shortlisted a panel of names for role of Ombudsman. 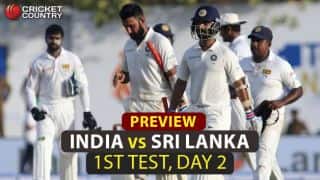