In a surprising move, the Board of Control for Cricket in India (BCCI) has published the 2013-14 annual report with pictures of Indian President, Pranab Mukherjee and India Prime Minister Narendra Modi on the cover. The president is seen conferring the Bharat Ratna on cricketing great Sachin Tendulkar while Modi is shown taking oath.

Modi was then president of theGujarat Cricket Association (GCA), but two days into taking oath he relieved himself off the role to focus on his new duty, passing on the role to Amit Shah, his trusted aide.

BCCI secretary, Sanjay Patel claimed the Board was delighted to see Narendra Modi assume Prime Minister’s role, “It was heartening to see Shri Narendra Modiji, president of the Gujarat Cricket Association, taking oath as Prime Minister of India,” he wrote in the journal.

The decision to do away with cricketer’s photographs for this edition of the annual report was met by varied responses from former and present Board members.

Kishore Rungta, a former BCCI treasurer and ex-president of the Rajasthan Cricket Association hinted that the board may be getting “relief” by giving importance to powerful politicians. “I don’t read much into it. It doesn’t impact Mr Modi. It doesn’t impact the BCCI, too, because if they are thinking that they would get some relief (by printing politicians’ photos), there is no chance,” Rungta told Mail Today. “I really don’t read much into it.”

Secretary of Gujarat Cricket Association, Rajesh Patel had no intentions of expressing his views on the matter saying, “I don’t want to comment on this.” Whereas the son of legendary Test spinner, Jasu Patel dismissed it as politics.

Former ICC and BCCI president, Jagmohan Dalmiya was diplomatic in his response, “It’s difficult to say. Somebody will have to look into it (the archives). It is likely that it (photos of politicians) might be there somewhere (on cover of BCCI annual reports). But nothing is coming to mind immediately.”

Former chairman of the senior national selection committee, Kishen Rungta said the move was reflective of changing times. “No, I can’t recall a politician’s photo being printed on the cover of the BCCI annual report. And I can go back to more than 50 years. There should not be any criterion about whose photos should or should not be printed on it, but it has not happened till date — that is the correct position,” he said.

“Since the Board has printed the photos of the President — he is not an ordinary politician — and the Prime Minister, there should not be anything wrong in it,” he added. 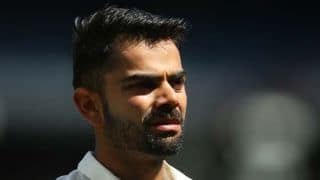