Cricket Association of Bihar (CAB) Secretary Aditya Verma said the Supreme Court has turned down the request of Board of Control for Cricket in India (BCCI) to reinstate N Srinivasan. Instead the Court has directed the BCCI to suggest ways to clean the dirty linen that exists within the institution.

“The court has replied based on BCCI’s two application presented by its counsel CA Sundaram’s argument that N Srinivasan be allowed to continue his duty as the BCCI president as there were no charges proved against him. The judge then revealed that he is one of the 13 named in the secret envelope submitted to it by the Justice Mudgal committee. The judge also asked the BCCI if indeed it wants to make the institution corruption free, then it must suggest mechanisms to the court to do so. The court suggested that the institution should not in any way have a blot on its image.” Verma said.

“On Indian Premier League (IPL’s) Chief Executive Officer (CEO) Sundar Raman’s fate whether he should continue as CEO of IPL 7 the CAB secretary said , “the interim-BCCI president Sunil Gavaskar had sent a letter stating that it cannot take a decision on the CEO’s fate as he had good relations with him as he is experienced and in view of that he asked the court to take a decision. Keeping the interest of the IPL the court asked the CEO of IPL to continue.”

On getting transcript copy of the recorded statements made by Chennai Super Kings (CSK) skipper Mahendra Singh Dhoni, board president and CSK owner Srinivasan and IPL Chief Operating Officer Raman by the Mudgal Commission , Verma said, “the court has directed the Mudgal Commission to appoint a counsel of their own and keep its view in its next hearing. If it has copy of the recorded statements then it can submit it to the court else even if it doesn’t then also the court will decide what needs to be done.”

Verma stated that the court also wanted to give a patient hearing on supsended IPS officer Sampath Kumar’s point of view on the allegations raised by him.

“The court also said that till the time whichever agencies conduct the probe on the IPL match-fixing and betting issue that Srinivasan will not remain as BCCI president. At the same time it will see under whose authorisation did Srinivasan attended the ICC meet that happened in Dubai of late,” Verma added.

The case dates back to June 2013 when the CAB secretary Verma raised charges of conflict of interest in the formation of BCCI’s two-member inquiry panel into the IPL corruption issue.

A Bombay High Court ruling later termed the probe panel “illegal”. The BCCI and the CAB filed petitions in the Supreme Court against this order.

The Supreme Court then appointed a three-member committee, headed by former High Court judge Mukul Mudgal and comprising additional solicitor general L Nageswara Rao and Assam Cricket Association member Nilay Dutta, in October 2013, to conduct an independent inquiry into the allegations of corruption against Srinivasan’s son-in-law Gurunath Meiyappan, India Cements, and Rajasthan Royals team owner Jaipur IPL Cricket Private Ltd, as well as with the larger mandate of allegations around betting and spot-fixing in IPL matches and the involvement of players. The committee had submitted its findings to the court on February 10. 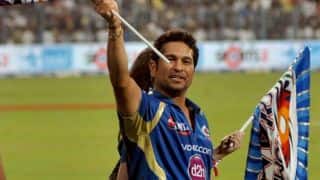 Virat Kohli-signed bat and ball up for grabs