The BCCI are looking for ways to avoid India playing arch-rivals Pakistan in the upcoming ICC Test League from 2019-20.

International Cricket Council (ICC) approved the new league structure for both ODIs and Tests. As the respective cricketing boards begin planning to organise Future Tour Program (FTP) for the upcoming seasons, Board of Control for Cricket in India (BCCI) too is onto the business. However, they are also looking for ways to avoid India playing arch-rivals Pakistan, owing to cross-border tensions between the two nations, while the government clearance would also be an issue in this regard. The ICC Test League is scheduled to begin from the 2019-20 calendar year, as BCCI secretary Amitabh Chaudhury is considering the factors to take a call on the issue of whether to play Pakistan or not. Aniruddh asks Khanna to share FTP plans before BCCI SGM on December 1

On India-Pakistan tie in the ICC Test League

“In any world competition or championship, if say 20 teams play, it is not possible to play each team against each other. The problem in not having a series between India and Pakistan is something which affects international cricket to a large extent. So nothing can really be planned out factoring the consequences on that situation. That’s being looked after. As I said, it is not necessary to play each and every team in a championship,” said Chaudhury, as reported by IANS.

“Record my statement nobody is in the dark, all members of the Board will be sent notice of the SGM along with relevant papers on each of the agenda points. As far as writing letter is concerned, it’s Constitution of India that has given rights to everyone to express. About not being in the loop, it’s not a fact. Papers can’t be circulated in a vacuum once the agenda is specified, it will be done when the time is right,” said BCCI treasurer Aniruddh Chaudhury. 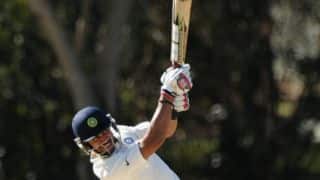