Mr Asad Rauf did not appear before the Committee but had sent his preliminary submissions on January 15, 2016, the BCCI informed in a press release.

The Board of Control for Cricket in India (BCCI) on Friday announced in a statement that it has imposed a five-year ban on Asad Rauf, a former umpire and a former First-Class cricketer from Pakistan. Last month, the Indian cricket board had deferred announcement of their decision on Rauf, as the Pakistani umpire had requested for more time to prepare his defense against the allegations of his involvement in the embarrassing IPL 2013 spot-fixing and betting scandal. Ever since the scandal broke out, Rauf has denied all the allegations levelled against him and has not travelled to India to present his case. Pakistan and the International Cricket Council (ICC) even dropped Rauf from their respective lists of elite umpires. ALSO READ: Asad Rauf allegedly bet money on IPL 2013 matches he stood in, writes Ed Hawkins

The BCCI said in a release on Friday, ” The Disciplinary Committee of the Board of Control for Cricket in India (BCCI) met today 12th February 2016 at the BCCI HQ, Cricket Centre, Mumbai. Mr Asad Rauf did not appear before the Committee but had sent his preliminary submissions on 15th January 2016 and written statement on 8th February 2016.”

The release added, “The Committee after considering the report of the Commissioner of Enquiry and the written statement of Mr Asad Rauf has arrived at the conclusion that Mr. Asad Rauf is guilty of misconduct and corruption within the meaning of Article 2.2.2, 2.3.2, 2.3.3 and 2.4.1 of the BCCI Anti Corruption Code.” ALSO READ: Asad Rauf rules out travelling to India for IPL 2013 spot-fixing probe

“Mr Asad Rauf has been banned for a period of five years from umpiring or playing or representing cricket in any form or anyway being associated with the activities of the Board and its Affiliates,” the release concluded.

Earlier last month, in January, the BCCI had informed that Rauf’s request to be given more time was considered by the Disciplinary Committee. “The Committee considered the request of Mr. Asad Rauf to give him more time to respond to the findings of the Enquiry against him. The Disciplinary Committee will meet on Monday, January 18, 2016 at Cricket Centre,” the Indian cricket board said in a release. 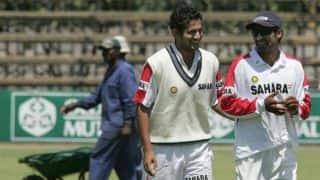 Did Irfan Pathan forget to invite Mohammad Kaif to his wedding?