According to Anurag Thakur, the obstacles to Test cricket's popularity have more to do with competition from other sports in an increasingly crowded landscape.

Board of Control for Cricket in India’s (BCCI) president Anurag Thakur has dismissed the idea of four-day Tests, as well as the two-tier Test system, saying neither change would necessarily solve the longest format’s biggest problem, i.e. poor attendances. According to Thakur, the obstacles to Test cricket’s popularity have more to do with competition from other sports in an increasingly crowded landscape. After the two Twenty20 (T20s) between India and West Indies ended with the second match producing no result and West Indies winning the series by 1-0, Thakur stated his views on the much hyped topic wherein he clearly indicated that if there is no foolproof format, it is not going to help the game in anyway. ALSO READ: BCCI congratulates IND on series win vs WI

Accordintg to Cricinfo, he said, “I think we should not even get into into that. We should analyse the shortcomings of Test cricket. Is it the paucity of time? The issue is why aren’t you getting enough crowd for a Test match? That is the basic issue.”

“Second, there is a generational gap I believe. We must look into the crowd which comes in England, Australia or in India. What is the average age who comes to watch Test cricket. India is a young country. We have a lot of youngsters. Whether they connect with T20, One-Day International (ODI) or Test, you can’t force the fan.  It is the fan who has to decide what he wants to see. You can give all the products, he is the best judge whether he has interest in A, B or C. So we are playing all formats. Let’s see which is the most watchable product”, added Thakur.

On the topic of possible day-night Test cricket in India, Thakur said that the “BCCI is not in a hurry to take any decision” and will continue carrying out trials during the ongoing Duleep Trophy (2016-17). Only after the competition is complete will the board revisit the discussion on the pink ball’s suitability in local conditions.

“This is one of the tournaments where we are trying the pink ball. We’ll take the feedback after the tournament is completed. Once it is completed, BCCI can take a call in future whether pink ball is viable in Indian conditions or not, whether it will help to make Test cricket more popular”, stated the BCCI president. ALSO READ: No day-night Tests for India this season?

“We have a long season at home where we are hosting New Zealand, England and Australia and Bangladesh for Tests, playing 13 Test matches at home and we have already finished four away with West Indies. So 17 Test matches in a season is a huge, huge period. When globally most countries are not playing enough Test cricket, BCCI is sticking to it, trying to make it as popular as other formats and we’ll try our best”, he said in conclusion. 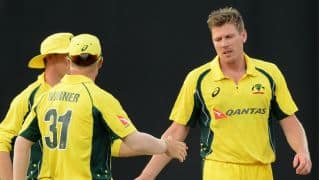