The Board of Cricket for Cricket in India (BCCI) had threatened to form a parallel world cricket body before the England and Australian boards agreed to the controversial restructuring of the International Cricket Council (ICC) and decided to give a lion’s share of revenue to the Indian board, said its secretary Sanjay Patel.

“We got criticised by many in the media and lot of them did not agree but we told them that if India is not getting its proper due and importance proposal then India might be forced to form a second ICC of its own,” Patel said.

“England and Australia agreed and after that it was decided and from June 27th onwards the new structure will come into place and I would like to state that all 10 full members have signed the resolution,” said the BCCI secretary who was the chief guest at the Sports Journalists Federation of India’s 37th Annual Convention.

There was also no stopping BCCI president-in-exile N Srinivasan from taking over as the first chairman of the ICC later this month in Melbourne as the Supreme Court has not prevented him from doing so, explained Patel.

“By the month end, India will take a leading role in the ICC. Mr Srinivasan is going. There is no Supreme Court bar on him. Both of us are going to Melbourne. In the last four months we have settled (the issue) with all the full members of the ICC and convinced them about the new structure and the new financial model of the ICC which would be followed in the coming years,” said Patel while addressing the national sports scribes.

“India would play a leading role in the ICC and the reasons are well known. India is more or less responsible for 68 to 72 percent of the ICC’s gross revenue but unfortunately so far we were getting three to four percent of it.”

Patel said that a private agency study has found out India’s substantial contribution to ICC.

“Srinivasan asked a private agency to study the model and find out who is responsible for what amount and we found that India is responsible for 72 percent and ICC worked out that it was 68 percent. We had a meeting with the ICC officials in Dubai and we informed that 68 to 72 percent is not an issue but it was clear that the majority of the income is coming from India, so why should India take only three to four percent.”

“After a lot of deliberations, and Australia and England also joined us and from the projected 2.8 billion dollars approximately for the cycle from 2016 to 2023 we worked out that India should get 24 percent which roughly works out to approximately 700 to 800 million dollars,” said Patel.

He also said that as part of the rescheduled Future Tours Programme India would get three major ICC events, including World Cups in the cycle chalked out over the next eight years.

“India has almost worked out the foreign tours programme till 2020. In the period of the next eight years India is likely to get three international events including World Cups.”

Patel also said that there was a move to relocate the ICC headquarters from Dubai and India was also a contender to house it.

“On the topic of moving the ICC headquarters, India is also a contender. By doing this probably India’s prominence and leadership in the field of cricket will be at great length and will be beneficial to our boys.”

He also hailed IPL-7 that concluded recently as a huge success.

“With a lot of uncertainties and lot of hiccups it was the most successful IPL tournament ever in all aspects. We had to move out of India (to UAE) but it turned out to the best part because the Indian diaspora enjoyed.

“Our ticket revenues were much better than what we had received in 2009 in South Africa, 2.4 times more than SA even though here we had two weeks of IPL as compared to full IPL in SA. Dubai has asked us whether it would be possible to host IPL once every two or three years. They expressed interest in hosting India versus Pakistan ties but the decision lies with the Central Government and only they take a call.

While stating that the investigation into the IPL-6 spot-fixing scandal is sub-judice with the justice Mudgal committee probing it, Patel said Srinivasan was innocent.

“As far as my personal view is concerned, Srinivasan is not guilty but we have to follow the laws of this country and we are abiding this thing. We are hopeful that things will be over by August end.

Criticised often for its attitude towards the media, the BCCI has decided to revamp its media department, said Patel.

“BCCI is revamping its entire media structure. We have already given one consultant firm to provide us with top class media person and top media PR person for BCCI,” he said. 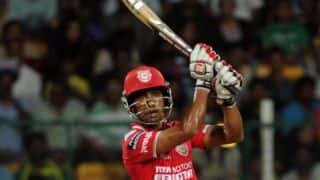